From a dream to a team 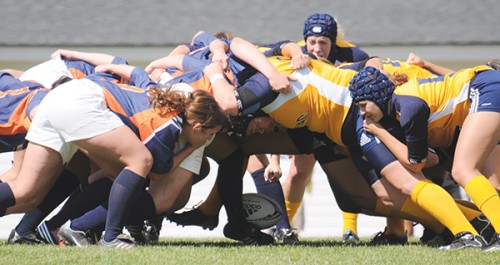 Two years ago, the idea of Quinnipiac possessing an official women’s rugby team was an afterthought. After a U.S. District judge ruled the university must add two more women’s teams for not enforcing Title IX rules in 2009, that afterthought became a reality. 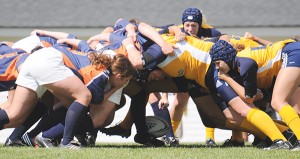 [/media-credit]
Senior fly half Colleen Doherty didn’t originally come to Hamden to participate in athletics at the collegiate level. At Oakmont Regional High School in Ashburnham, Mass., she was involved with the varsity track, soccer and basketball teams and also won her school’s Female Athlete of the Year award her senior year.

“I was very involved with sports throughout my whole high school career,” Doherty said. “When the opportunity presented itself for women’s rugby, I immediately jumped on it.”

When the team was declared a Division I squad last year, Doherty led the team with 30 tackles and assisted 11. All of this was possible because of an email.

“There were a bunch of emails sent out saying, ‘If you want to learn more, come to these meetings,’” Doherty said. “One of my friends was interested and she got me to do it. I met with coach (Becky) Carlson and she gave me the times for tryouts. It felt like something I wanted to do.”

Doherty isn’t the only high school student athlete to become a late-blooming Division I athlete. Junior Allison Gnys had a similar situation to her senior teammate, but was informed of the opportunity differently.

“I heard about it second semester freshman year and my lacrosse coach from high school emailed me and told me to try out when I was home,” Gnys said. “She was like, ‘Oh, you played lacrosse and soccer. It’s like that but running with the ball.’”

Carlson is the head coach of the women’s rugby team. She’s associated with 30 NCAA prospective institutions that later added a club or team, including her current stop at Quinnipiac.

Carlson is an alumna of Eastern Illinois University, the home of the first ever Division I women’s rugby team. She won the 1999 Strength and Conditioning award while playing the sport for the Panthers.

“We certainly maintain a lot of respect for our D-I NCAA counterpart at Eastern Illinois,” Carlson said. “The program is very experienced and very well coached. For both myself and coach (Michelle) Reed, we played and coached there so it has a special meaning.”

The Bobcats’ first game this season was against the Panthers, who haven’t lost a home opener in 13 years. The Panthers also swept the season series against Quinnipiac last year, 3-0, in which they outscored the Bobcats 123-8. Quinnipiac defeated Eastern Illinois by a score of 2 sets to 1 to complete one of the biggest upsets in the sport’s history and snap the Panthers’ 29-game winning streak that dated back a few years.

“I had a friend in the crowd saying that people were getting on their cell phones calling their friends saying, ‘You need to get out here, EIU is about to lose this game, I have never seen this happen,’” Carlson said. “Within minutes there were fans at the fence and people from other parts of campus checking out the game.”

Carlson added that only the coaching staff, players and herself truly understand the feelings that took over once they heard the shriek from the final whistle.

“The EIU crowd had not seen its team lose a home opener in 13 years and it was absolute silence on the other side of the field and the home bench,” Carlson said. “Our players were dog piled out on the field and my assistant coach and I had smiles on our faces. It was pretty surreal and QU should be proud of what this team has accomplished in its second season.”

After defeating the only other Division I women’s rugby team in the country in their first game, the team and coaching staff can focus on winning the division. They play in the Tri-State Rugby Conference, formerly known as the Metropolitan New York Rugby Football Union until this past summer.

The Bobcats carried the momentum from their opening win into their next three games against Binghamton, SUNY New Paltz and Vassar, defeating the squads by scores of 91-0, 94-0 and 36-12 while breaking program records in the progress, giving them a 4-0 record this season.

The second year team already has more wins than it did in its inaugural season when it went 3-6-1.

With a Division I sport that is not as popular as other sports developing out of the blue, 80 percent of the Bobcats’ roster didn’t play the sport prior to college according to Carlson.

This year, Carlson brought in freshman recruits for the first time. Five out of the six freshmen on this year’s roster have experience in the sport and one of them participated with the national team camp.

“It was quite a preseason seeing the two entities (newcomers and veterans) mix and learn each other’s styles of play but in the end, to be successful they all need to play Bobcat rugby,” Carlson said.

Doherty expressed that she is excited for the future of the program, and that building a solid foundation is something that the she and the team take to heart.

“There are days when the team understands its unique position as a pioneer for this sport and some days where they forget,” Carlson said. “We are quick to remind them and they are receptive. I think more important that teaching the game of rugby is the fact that the coaching staff will continue to impress upon the program, a level of humility in remembering and appreciating the hard work that needs to be put in in order to make this a viable sustainable program.”