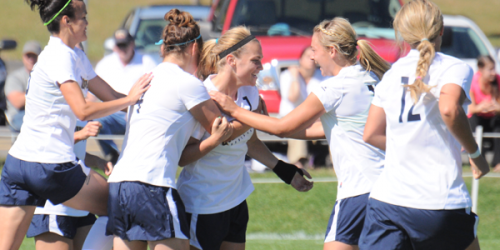 Junior Taylor Healey’s first career goal gave Quinnipiac an early advantage on Sunday afternoon, as the women’s soccer team held on to defeat Central Connecticut State by the final of 1-0, moving to 2-0 in Northeast Conference play.

Eleven minutes into the opening half the Bobcats successfully took advantage of an early corner kick opportunity. Senior Crystal Burns struck the ball into the penalty area and, after being deflected to the 18 yard line, Healey blasted the ball into the back of the net at the QU Soccer Field on Mt. Carmel Campus. 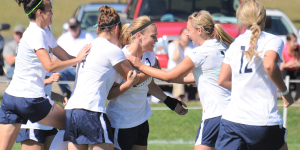 “That goal is huge,” Quinnipiac women’s soccer head coach Dave Clarke said after the game. “It was important that we came out strong. Central is one of the best teams in the conference, so to get up early was big. We didn’t want to give them any sniff that they could turn their season around today.”

Healey’s early goal proved to be enough for senior goalkeeper Jill Kelley. Kelley had three saves in the contest, and earned her 24th career victory. Quinnipiac’s defense also aided Kelley in preserving the one goal lead, denying any rare Blue Devils opportunity. The shutout was Kelley’s fifth of the year.

“Jill was very good today, as well as her back line,” Clarke said. “She’s doing everything well right now, and has a strong back four in front of her. We have some very smart players back there.”

The Bobcats controlled possession for most of the games duration and had nine corner kick opportunities to the Blue Devils one. The home team was outshot five to two by Central Connecticut in the first half, but battled back for a five to two shot advantage in the second half.

Two players picked up yellow cards in the match. Senior Kemesha Woodfine, the team’s leading scorer, was given the warning in the first half, while Shannon Larkin joined her in the second half. Fortunately, the home team was able to control their emotions in the effort of preserving a tight lead.

With the win, Quinnipiac improves to 6-9 all-time against CCSU. The Bobcats now hold a record of 6-2-1 overall and are 2-0 in conference play. Sunday’s victory also preserved their spot at the top of the NEC standings on the young season. Their next action is Friday evening when they travel to LIU Brooklyn for another conference contest.