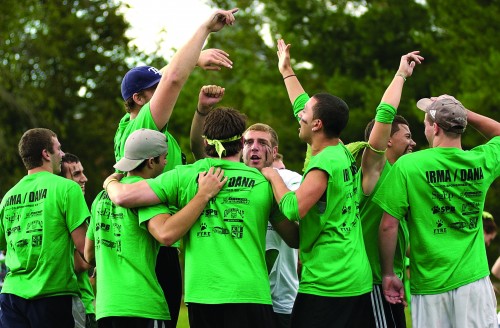 Sigma Phi Epsilon’s freshman field day could have been sidelined this year. Cuts in funding for SigEp’s Hall Wars forced the fraternity to produce more money to preserve its annual event. 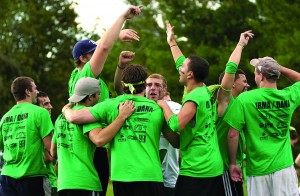 [/media-credit]Now in its eighth year, Hall Wars is a September staple at Quinnipiac, but this year, the brothers of SigEp had to dig deeper into their own pockets to deliver the annual event to the university community. SigEp lost one of its key sponsors for Hall Wars this year: the Student Programming Board.

“SPB didn’t want to do a co-sponsorship because they didn’t feel like their staff had enough presence or involvement on the day of Hall Wars,” SigEp President Daniel Sullivan said.

Hall Wars, which is set for Sunday, puts freshman residence halls against one another in a day of athletic competitions, including inflatable games and relay races. There is also a dunk tank and raffles, rounding out a fun-filled day for Quinnipiac’s freshmen.

Sullivan estimated that SigEp spends between $7,000 and $8,000 to make Hall Wars happen each year with the help of its co-sponsors. SPB played a key role in planning the event in past years.

Junior Connor Croteau is in charge of planning Hall Wars and said SPB was responsible for renting the inflatable games, dunk tank and popcorn machine.

When SigEp lost SPB’s co-sponsorship, the brothers had to find a way to raise the lost funds, otherwise the fraternity would need to scale back Hall Wars for this year’s freshman class.

“Conflicts happen, so you just adjust to it,” Sullivan said. “Nothing impeded the process of fundraising so we just took it upon ourselves, as a fraternity, to do more fundraising as individuals.”

The brothers of SigEp made up for much of the lost funding on their own. In past years, each brother was responsible for his own share of fundraising, but this time around, Croteau asked for an increase in their donation amounts.

“Over the summer, each brother is supposed to raise a certain amount of money, and we raised [that total] to compensate what we lost from SPB,” Croteau said.

SigEp usually requires each brother to raise at least $150 towards the Hall Wars fund, but this year that number was bumped up to $200 per person. However, it took a bit more to make up for all of the funds lost after SPB cut ties from the event.

The fraternity used additional fundraisers within the community to support its cause, holding an event at Wayback Burger and gaining co-sponsorships from other area businesses, including Smokey’s Char-Grill BBQ and Cheshire Cycle.

The support from local businesses helped fill the funding void left by SPB, but another student organization stepped up to help and may be looking to take SPB’s place.

“[Residence Hall Council] has helped out too and we’re trying to form a relationship with them,” Croteau said.

With additional funding from its brothers, local businesses and RHC, SigEp will bring Hall Wars back to Quinnipiac, and according to Croteau, the fraternity did not scale anything back.

“Our brothers came together and we raised more money to make up for SPB’s non-sponsorship,” Croteau said.

SPB had no comment on its decision to no longer fund Hall Wars, but SPB President Lauren Enea said the organization still supports both SigEp and Hall Wars.

The brothers of SigEp overcame a great loss to their event budget, and Sullivan is pleased Hall Wars will go on as planned because the event is so important to the freshman community at Quinnipiac.

“The best thing about Hall Wars, what we always strive for, is to just get the freshmen to have an event where they all get to interact with each other and hang out,” Sullivan said. “They’re new, they’re still transitioning to their dorm rooms, and providing that opportunity for them to have a field day is what enables them to get to know each other.”