Lafayette comes from behind to shock field hockey 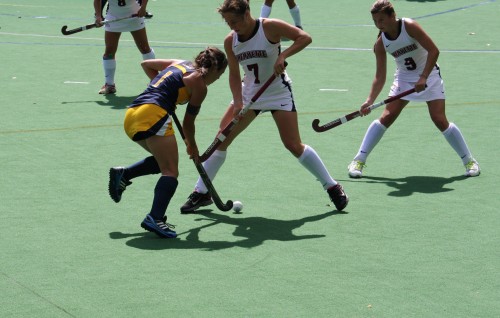 Despite jumping out to a 2-0 lead, the Quinnipiac field hockey team fell to Lafayette 4-2 Sunday afternoon.

Jennalise Taylor scored the first goal just 1:55 into the game on a penalty corner. Lauren Ziminski initiated the play with a pass to Jess Rusin who found Taylor on the left side of the goal. 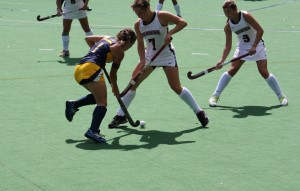 Rusin scored the second goal at 10:43 after dodging a Leopard defender and sweeping the ball into the net passed the Lafayette goalie, Jessica Deutsch.

Taylor and Rusin lead the team in goals with five and four respectively.

Lafayette (6-1) shut the Bobcats down for the remaining time scoring one goal in the first half and sealing the win in the second half with three additional goals.

“In my wildest dreams I didn’t think it would be 2-0 to start but I think after that there needs to be some poise and some control,” head coach Becca Main said. “I think we got out of our game for a little bit and started to forget that we have to play 70 minutes not 10 or 15 minutes.”

Megan Conaboy made her first career start in goal for the Bobcats saving seven of Lafayette’s 11 shots on goal.

“For Megan to come in and make her first start against Lafayette is a difficult and scary thing to do,” Main said. “I thought she stepped in and knew what she was supposed to do did and did a nice job.”

The Bobcats were outshot by Lafayette 20-4 as well as in penalty corners as they led 11-6.