This Is Me: Rising Star 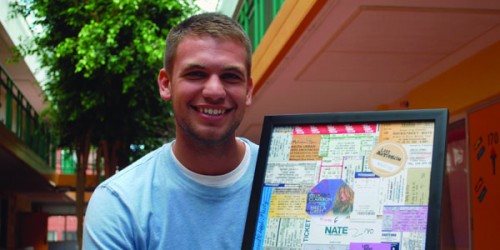 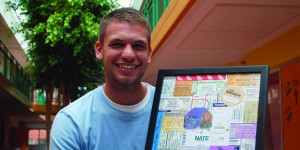 [/media-credit]Fans line the gate of a New York City movie premier, anxiously waiting to see who walks the red carpet. Prepared with posters and pens for potential autographs, the crowd shakes with excitement. Brett Kaselouskas is there, calmly standing in front of the bunch, not with a poster to be signed, but with his resume to be handed directly to the stars.

Kaselouskas has career dreams as big as the fame of every reality TV star and talk show host, considering that he’s met a majority of them, with an unbelievable story behind each experience.

“A lot of people will use the word ‘stalker,’ but for me it’s more than just getting the picture,” Kaselouskas said. “What I like more than a picture for Facebook is an opportunity to make a connection and really understand their point of view on what this industry is.”

Kaselouskas has countless stories of celebrity encounters, ranging from Carrie Underwood to Nicole “Snooki” Polizzi. In his multiple adventures to New York City, whether he’s going to a talk show, a book signing or a concert, he comes home with more than just an autograph, but a potential career connection. To him, this means so much more.

“Especially now since I’m looking for internships and I have made all of these connections in so many places. I could potentially contact ‘The View’ and have Sherri Shepherd be a reference so all of those trips paid off for me,” Kaselouskas said, referring to his many visits to the talk show. He recalled one memory when he had a 20-minute, one-on-one conversation with Shepherd about the industry.

Kaselouskas has a surprising variety of interests when it comes to meeting celebrities. One of his most memorable stories is with another View star, Barbara Walters. At 16, it was one of his first experiences meeting a celebrity, and even she was shocked that he was interested in her life.

“When do you even have time to watch ‘The View?’” Walters said, and Kaselouskas responded, “That’s what DVR is for Barbara!”

“My friends were like, ‘who cares about Barbara Walters?’ For me, the fact that she’s interviewed every president and every person that has been anyone was fascinating to me, and I wanted to read her book and hear her story,” Kaselouskas said.

“So to shake Barbara Walters’ hand was a moment for me,” he explained.

Kaselouskas’ list of encounters seems infinite, but an unforgettable event was when he met Oprah Winfrey. He had tickets for her show at Radio City Music Hall and he specifically went early in the morning.

“I saw some people collecting outside, and she gets out of the car, I walked right over to her and said ‘Hi Oprah’ and took a picture, she said to me, ‘Bless your life.’”

His celebrity fascination started when he was 16 and went to see the Jonas Brothers on “Good Morning America” with a good friend from home. Little did he know this experience would be life changing, inspiring his current career dreams.

“We thought we were the coolest people going to New York City at midnight, and we winded up front row of a barricade at ‘Good Morning America,’” Kelly Miskin, 20, said. “It was, like, the best day of our lives.”

Miskin, or Kaselouskas’ “partner in crime,” has joined him throughout the years on several star-studded adventures and is always impressed with his composure and confidence around celebrities.

“I get super nervous. These people make more money than you do, they have amazing lives, and it’s intimidating. But Brett is so good at it, and he always says the right thing,” Miskin said, who has been best friends with Kaselouskas since their junior year of high school.

“I just shake their hand and look them in the eyes and have a conversation. You just have to treat them like normal,” Kaselouskas said.

Together, the duo have seen Kathy Griffin, Chelsea Handler and Hilary Duff. Through the years Miskin has watched Kaselouskas evolve from the star-struck fan to the career-driven, networking, college student.

Since the time of their first adventure, Kelly Clarkson knows Kaselouskas by name, Bethenny Frankel has starred his resume and Kim Kardashian wouldn’t be surprised if he was working for her one day. (Yes, she actually said that.)

“He sees it differently now,” she said. “He wants to definitely work with these people that he’s been idolizing for so long, now it’s a whole other aspect for him.”

Kaselouskas has also gotten experience in the industry right here at Quinnipiac as Production Assistant for the Student Programming Board’s fall and spring shows. He’s worked on shows for the past two years including Bob Saget, Ke$ha, 3OH!3 and O.A.R.

“What really struck me about Brett was that he did maintain his professionalism the whole time,” Jamie Kloss, former SPB Mainstage Chair, said. “He wasn’t trying to meet the celebrities and he was grateful about everything that he did which is where you really need to begin if you want to make it to the industry.”

Kaselouskas was the main source of communication between the production team of the artist and the Quinnipiac staff the day of the show. Kloss remembers his ease and comfort level among the talent, and is impressed by his drive and active networking throughout college.

“These people that are coming in work with hundreds of students each year, and I think that it really says something when you can tell that they like and respect a student as much as they did with Brett,” Kloss said.

With every show, Kloss said that Kaselouskas made the production team and the artists feel comfortable because of the fact that he was so calm and collected throughout the process.

“That opportunity was something I was so excited about, to find out I could do [that] here at Quinnipiac,” Kaselouskas said. “To put on a resume that you’ve been production assistant for Ke$ha’s ‘Get Sleazy’ tour is a big deal, and I’m so thankful for that opportunity.”

Kaselouskas, who dreams of one day being the next Ryan Seacrest, is obviously doing what he can do get his foot in the doors of Hollywood. Although his parents would love for him to stay close to home, he said California is where his career is.

The experiences and connections he’s made has far succeeded the money he has spent on train tickets, books for signings and venue tickets. “It’s definitely paid off,” he said.

“The dream job would be to work with someone and help them further their career by being part of it,” he said. “Time will tell what opportunities come along for sure, but what started out as an interest in celebrities has turned into my career path and will hopefully be the rest of my life.”