This Is Me: King of the Q

Aaron King was the first to arrive home on an afternoon in May 2010. High school was coming to an end, and there was only one thing on his mind: getting into college. He spotted an envelope on the table marked Quinnipiac University. He rushed over to grab it, knowing that this was the letter of all letters; the letter deciding if he could attend his first choice or not.

He ripped it open and read it as fast as he could. Seeing the words “Congratulations!” first made him speechless, but then, at the top of his lungs, he screamed. It echoed throughout his entire house in Washington D.C. 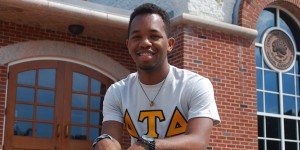 [/media-credit]King called his mom and dad immediately after opening the letter.

“I was like, ‘Mom, Mom, Mom!’” he said. “And she was like ‘What’s wrong, what happened?!’ She thought something bad had happened, like I was in an accident or something because I was so excited. My dad had the same reaction.”

King also made the news his Facebook status, tweeted about it, posted it on every social media known to man, he said.

The sophomore public relations major is the first in his family to pursue a college education. Though he has the first generation status, like roughly 30 percent of entering freshman in the United States, it does anything but define him.

For as long as he can remember, King has been on the path to higher education. It was a fact of life. He researched universities as an eighth grader, he said, and joked that as soon as he came out of the womb, his mother told him he would go no matter what.

“My parents always pushed me, saying ‘I want you to do what I couldn’t do,’” King said, adding that both his parents witnessed family members not make anything of their lives, and wouldn’t let that happen to him.

King attended high school in Maryland instead of D.C., he said, because it is a better system that could prepare him for college. It also has a higher graduation rate than the D.C. school system: 86 percent compared to fewer than 60 percent as released by the Office of the State Superintendent of Education.

King became best friends with Anna Brune in high school. She recalls his constant desire to do well in school.

“Once he wants to do something, he sticks to it and there’s no stopping him,” Brune said. “And he applied to schools all over. I think he wanted to experience a whole new world, gain independence and really make his parents proud.”

When King began the college application process, however, he did feel the weight of being the first.

He did all the paperwork himself, and was mostly stressed about obtaining the necessary information from his parents, he said. He doesn’t know what he would have done without the help of his counselors and teachers with forms he didn’t understand. But for the most part, it wasn’t too difficult, he said.

Nearly 17 percent of Quinnipiac’s Class of 2015 are first-generation college students, according to the UCLA Cooperative Institutional Research Program survey.

A 2010 National Center for Educational Statistics study found a wide gap in the graduation rates between four-year students whose parents earned degrees, 69 percent, and those whose parents never went to college, 40 percent. These students are more likely to drop out for a range of reasons, including little preparation, feeling like they don’t belong, bad grades and financial need.

“I think there is more pressure on the person who is the first generation,” King said. “For those who have parents who have gone, they already know what it takes to graduate because they’ve done it before. But for first generation, it’s like you’re walking on eggshells. If you mess up, there’s a possibility you may drop out, and you may not have anyone telling you what you’re options are or really supporting you. You have to be self-motivated.”

King said his transition to Quinnipiac was a smooth sail, the hardest part being leaving his parents and younger brother. When he does feel stressed, it is mostly from his perfectionist personality.

“I pressure myself more than anyone else,” King said. “I’m my toughest competition in my head. I have this quote: ‘The biggest room in the world is the room for improvement.’”

King said he immediately made friends in his hallway in Dana, got involved in Q30, where he is now the promotions director, and joined the fraternity Delta Tau Delta.

Anthony DeCandia and King have been friends since freshman year, and co-anchor Q30’s show “Hashtag That” together. DeCandia has been impressed by King from the beginning.

“He really knows how to balance a social life and schoolwork,” DeCandia said. “He double checks the script to make sure it’s okay and motivates me to get it done on time. But he’s also always a lot of fun and really outgoing.”

DeCandia also said that King is a great friend, and admires his creativity and work ethic.

“I think it’s great how he is just figuring it out all on his own. He’s doing a great job,” DeCandia said.

King has many goals for himself, which could be a factor behind his successes thus far.

His dream job would be to be a PR manager for GQ Magazine, he said, as he is a style buff and reads every issue. But more short-term, his goal is to graduate and look back with no regrets.

“Being the first one? I’d say that makes me feel like I’m doing this for [my parents],” King said. “I can look back and say, ‘Mom and Dad, I did this for you.’ That’s my biggest goal. And having my parents say ‘I’m proud of you, everyone is proud of you.’”

King said that graduation day will be one of his proudest moments and expects a lot of tears.

“Pretty sure everyone in my family is going to cry, and then that will make me cry,” King said. “Just waterworks. So much crying.”