Inside the Mind of a Transfer Student 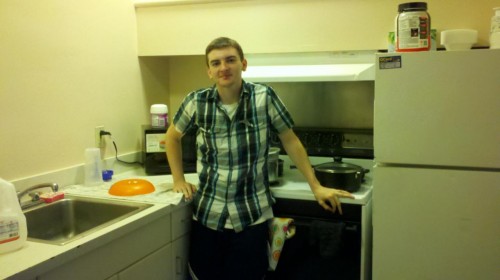 Sophomore transfer student, Chris Caruso, shares his earliest experiences at Quinnipiac, including what it’s like living in Complex, as well as his dramatic switch from the Pittsburgh city life.

What college did you go to before you transferred to Quinnipiac?
I went to Point Park University in Pittsburgh, Pennsylvania.

Are you from Pennsylvania?
No, I’m actually from Manalapan, New Jersey. I know it’s far, but the distance doesn’t bother me much.

So why did you choose to go to college in Connecticut? Why Quinnipiac?
I chose the school, not the state. I liked my other school, but I didn’t really know what major I wanted to pursue at the time. I was a declared psychology major but after taking a few psych classes I was like ‘I don’t want to do this anymore.’

What major did you ultimately decide on?
I’m currently a health science major. That’s why I chose Quinnipiac. I knew QU had a great program for any health science major. I really want to be a physician’s assistant, which is a major Point Park University didn’t have. I knew I needed to switch schools, but unfortunately a lot of my credits didn’t transfer so even though I should be a junior, I’m technically a sophomore.

Did it bother you that your credits didn’t transfer since it puts you a year behind?
I was annoyed, but at the same time, I expected it. I really wasn’t surprised at all. I knew I needed to make the change regardless, so I tried not to dwell on it much.

Do you miss it there?
I mean, yes and no. All the dorms were doubles so it was a lot easier to meet and visit people in your building. And I liked Pittsburgh because everything was in walking distance. But coming to Quinnipiac was definitely best for me.

How are you fitting in?
I’m getting there. Right now—since I live in Complex—the only people I really know are other transfer students since we all live in the same building. It’s not bad.

It is a running joke for students to make fun of Complex since it’s not as ‘desirable’ as the other sophomore buildings. How do you like it so far?
That’s what I’ve heard! So many people are, like, anti-Complex and I don’t get it! Our room has an entire kitchen with a stove and a full-size refrigerator. As far as I know, none of the other buildings have that. And it’s so easy to make friends in Complex. Everyone just leaves their door open. I really don’t mind living here at all.

So, your adjustment process is going okay?
Yeah, I’d say so. I’m branching out. I know someone from my hometown that goes here, and he’s been introducing me to a lot of cool people, so that definitely helps.

You’re lucky to have someone you know on campus. Do you think it would be more
difficult adjusting to QU if you didn’t have him to rely on?
Oh, absolutely. He’s my lifeline. I text him all the time if I have any questions about the campus, where classes are, stuff like that. I wouldn’t have been able to adjust as quickly. Without him, things would be a lot different.