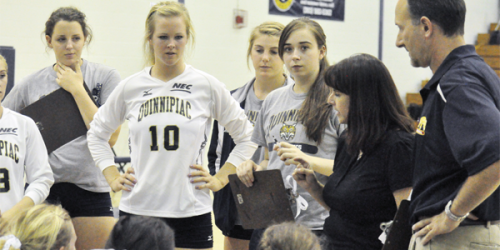 FILE: In this photo from Sept. 11, 2010, former head coach Robin Lamott Sparks talks to the volleyball team during a game.

Competitive cheerleading was ruled not a sport in 2010, and two years later, it stays that way – for now.

The Second Circuit U.S. Court of Appeals ruled that competitive cheerleading is not a sport under Title IX requirements on Tuesday, upholding a U.S. District Court decision against Quinnipiac University. 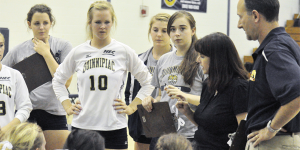 [/media-credit]FILE: In this photo from Sept. 11, 2010, former head coach Robin Lamott Sparks talks to the volleyball team during a game.

“[W]e reject Quinnipiac’s challenge to the district court’s finding that the school engaged in sex discrimination in violation of Title IX, and we affirm the order enjoining Quinnipiac from continuing such discrimination,” the court said in the docket.

After the university tried to cut the men’s golf, men’s track and field and women’s volleyball teams to make room for competitive cheerleading in 2009, the volleyball team sued the school, saying the university was not in compliance with Title IX, a federal law to prevent gender discrimination in varsity college athletics.

Title IX states: “No person in the United States shall, on the basis of sex, be excluded from participation in, be denied the benefits of, or be subjected to discrimination under any education program or activity receiving Federal financial assistance.”

The volleyball team said the university would not be in compliance with Title IX by not having the same female-to-male ratio of athletes as the school had students. The volleyball team said the university manipulated team rosters by counting some athletes who compete in more than one sport (e.g. women’s cross country and women’s indoor/outdoor track and field) twice.

According to the docket, there was a 3.62 percent disparity between women’s varsity athletic participation (58.25 percent) and the women’s undergraduate population at the university (61.87 percent).

“[W]e acknowledge record evidence showing that competitive cheerleading can be physically challenging, requiring competitors to possess ‘strength, agility, and grace.’ Biediger v. Quinnipiac Univ., 728 F. Supp. 2d at 101. Similarly, we do not foreclose the possibility that the activity, with better organization and defined rules, might some day warrant recognition as a varsity sport. But, like the district court, we conclude that the record evidence shows that ‘that time has not yet arrived,’” the court said.

U.S. District Court Judge Stefan R. Underhill ruled in 2010 that the university would need to comply with Title IX standards and keep the volleyball team through at least the 2010-11 season.

“We expect the Second Circuit’s decision to finally persuade Quinnipiac and any other university in violation of Title IX to stop fighting gender equity and start providing meaningful and equal athletic opportunities for women,” Sandra Staub, legal director for the American Civil Liberties Union of Connecticut, said in a press release.

After Quinnipiac said it was going to eliminate the volleyball team, the ACLU of Connecticut filed suit with three cooperating attorneys, including Jonathan Orleans of Pullman & Comley, LLC.

“This year marks the 40th anniversary of Title IX, and it’s fitting that this decision underscores its importance,” Orleans said in a press release. “This is a great victory for Quinnipiac’s female student athletes and for women’s collegiate sports.”

The university filed an injunction on Dec. 21, 2011 to try and lift the case, but the federal appeals court ruled in favor of the volleyball team.

“The university naturally is disappointed that the court did not rule as it had hoped,” Vice President for Public Affairs Lynn Bushnell said in a statement to the Associated Press. “Quinnipiac will continue to enhance opportunities for our female student-athletes, which include volleyball, acrobatics and tumbling, basketball, cross country, field hockey, golf, ice hockey, lacrosse, rugby, soccer, softball, tennis and indoor and outdoor track and field.”

The volleyball team will play its first game of the 2012 season on Aug. 25. Coaches and players were not available for comment.