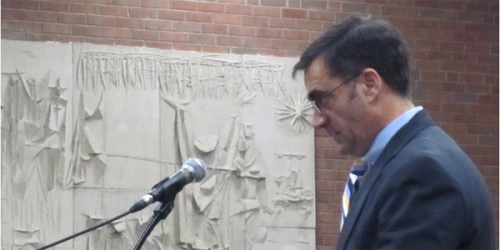 Six months after the Hamden Planning and Zoning Commission requested a five-year expansion plan from Quinnipiac, the “Master Plan” was finally discussed last night at the commission meeting.

The commission has concerns that the university’s enrollment is growing faster than its ability to accommodate the new larger numbers, which is why the five-year plan was initially requested. Quinnipiac sees its 259 empty beds as a money pit, but also as a cushion. There were no plans for construction of new beds in the five-year plan because, according to Quinnipiac’s attorney Bernard Pellegrino, Quinnipiac will wait until it has filled its empty beds to begin construction on new beds.

Assistant Town Planner Dan Kops pointed out that in its five-year plan, Quinnipiac’s projections for empty beds stayed the same despite growing class sizes, with a note that new beds could be built if necessary or double rooms could become triples.

People in the town have had complaints about students living in residential areas, and Quinnipiac stated last night that it is on the same page as the town of Hamden when it comes to wanting to bring students back on campus. Quinnipiac claims to have been marketing “The Senior Experience” for the past three years, a program which includes privileges like parking passes and perks like reduced cost of room and board and better chances of living without a direct roommate.

Newcomer to the commission Michelle Mastropetre offered advice that mirrored the sentiments of most students: improve the living conditions of York Hill before you lower the cost, she said. Pellegrino responded to this by offering her a tour, and volunteered his own impression of the campus: “I’d live there tomorrow if they gave me a room,” Pellegrino said. “It is the Taj Mahal.”

The tone of this July meeting was much less combative than the meeting six months ago. This was merely a discussion, or “friendly sparring,” as Pellegrino dubbed it, between the commission and Pellegrino, the university’s attorney. Public input was not allowed or tolerated. Hamden resident George Mudry, who has been vocal against students in residential neighborhoods in the past, was in attendance and attempted to raise his hand and volunteer his input, but was not called on nor given the opportunity to speak.

The commission made it clear this time around that it was proud to have Quinnipiac University in the town of Hamden, and it did recognize the income the school generates. “The criticism is not against the enrollment,” Kops said. “The criticism is that Quinnipiac is growing faster than its capacity to house new students.”

Though this is not the complete plan the commission was looking for, the commission and the university are in agreement that the focus needs to be on reversing the off-campus culture. “We are attempting to roll back the tide of 10 years of the senior class going off campus,” Pellegrino said. Commissioner Joseph McDonagh phrased it differently, “You are feeding students the drug of being able to live off campus.” The university must come up with a way to convince upperclassmen to Just Say No to that drug.