Relay through the eyes of a Bobcat 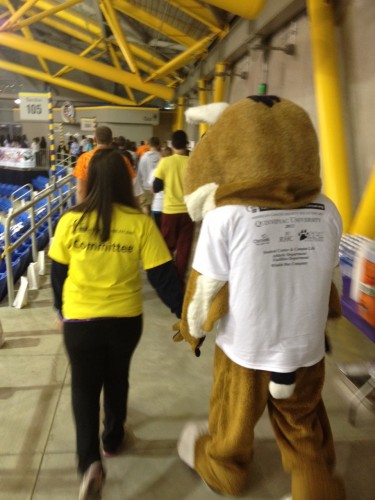 "No one fights alone"

Masklophobia, the fear of masks or mascots is a phobia that I just do not get. I am not being biased because I am Boomer the Bobcat, but it was something that puzzled me long before I ever jumped into the costume for the first time and placed the oversized head over my own. The job of the mascot is to entertain people and that is what I do; I know I am doing my job every time I see a smile on someone’s face.

Out of the many events that I have attended as Boomer throughout the year, Relay for Life was the first event that really touched me. I was initially supposed to make an appearance for about an hour to an hour and a half, but I ended up being in the suit for more than six hours.

During Relay I walked around and just did my job. As a college mascot, Boomer can get away with pretty much anything. I saw random people and hugged them, shook their hands and covered their eyes. When people asked to take a picture with Boomer, I had no problem with it. I even lifted up and carried some people as the picture was being taken. People always ask me if I smile under the mask when a picture is being taken and the answer is all the time.

Children approaching Boomer make my day. Sometimes they would gently poke me, other times they would pull my tail, making me spin around to look down and see a glowing young face either saying hello or asking for a hug. My favorites are the littlest children still being carried by their parents because the first time they see me they are deathly afraid. Then their parents tell them that Boomer is a nice bobcat and after a while they come to their senses and Boomer is their new best friend. I even had some older children holding my hand and having full conversations with me even though I am not able to speak back.

As Boomer, my sight is very limited and I have almost no peripheral vision. When it came time for the Luminaria Ceremony to remember all of those who had lost their battle with cancer, the TD Bank Sports Center became almost pitch black, with glow sticks and the names of those who had passed on the jumbotron as my only source of light. I walked by myself for a few minutes until people randomly held my hand and walked with me, or placed their hand over Boomer’s shoulder or just said hello. People had a connection with Boomer even though they did not know the man underneath the mask. It is amazing when a person loses one sense how much stronger the other ones become. As I walked and bumped into tables all I heard was the music and in the background, the tears of the other people around me, which caused tears to fall from the eyes of the man underneath the mask.

At Relay for Life, I was there to entertain people. During Relay, there were obstacle courses, a moon bounce and even a mechanical bull. I tried to participate at each station, but some were more successful than others. My head was not able to fit in the moonbounce, and during the obstacle course, I was not able to fit all the way through, but when it came time to ride the bull, I conquered it for 17 seconds, longer than some other people. For all three of my trials people were laughing and entertained; I did my job.

When people say that they are afraid of Boomer it does not make me leave them alone; instead I continue to play around with the person in fear and entertain all their friends who are laughing and taking pictures, hoping they will eventually realize I am there to be their friend.

After a few small breaks from the costume, I finally took it off for good after six hours. When I was Boomer, I did not want to miss one moment of entertaining people. I was a sweaty mess by the end, but I did not care because all of the sweat meant that I put my all of my mind and body into my job. Once I came out, took a shower and became Lesly Alvarez again, everything was different, I felt like I was not making as big of an impact as I was before but that did not stop me from still enjoying myself.

The next day, when Relay was over, just like after any other event that I had done, I walked around the campus and saw all the people that I had made laugh and smile the day before and thought about how they would never know it was I underneath the mask. I do stare a little, but I know I made an impact on every familiar face that I see.

Boomer is a work-study job, but I do not do it for the money; I do it for the memories that I make for myself or for other people. I am Boomer because I would rather make other people happy rather than myself, and I feel like I do every time someone takes my picture or hugs me. Do not be afraid of Boomer or any other mascot because they are not meant to hurt people but instead are meant to bring people together.

I am not the only person who is Boomer, so next time you see him do not assume that it is me, because there is more than one person trying to make your day!