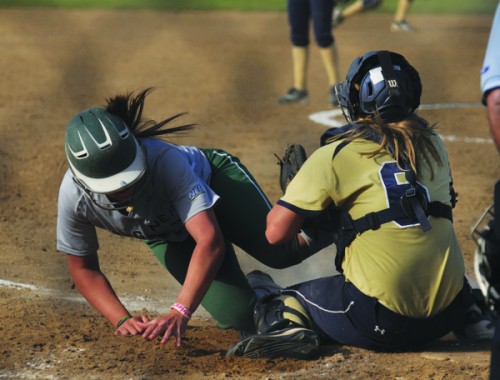 Ever since Jordan Paolucci went down with a knee injury on March 13, Ashley Heiberger has caught all but 10 innings in 43 games, earning her spot as the permanent starting catcher.

“Never once missing a pre-team practice. Showing up when she’s sick. Showing up on a Tuesday after she caught four games in a weekend to catch a bullpen session,” Quinnipiac head coach Germaine Fairchild said. “Ashley’s never shied away from the drudgery or mundane nature of being a catcher in putting the work in every day.”

In 28 games since the injury, Heiberger has scored seven runs, knocked out 15 hits and driven in seven RBIs through 28 games and 62 at-bats, all while getting very little time off from the catching position. Heiberger has also been hit by 22 pitches this season, 11 more than anyone else in the Northeast Conference. 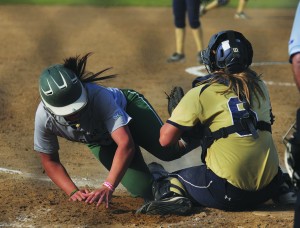 “I don’t think [catching] has taken a toll too much on my body. I do rehab every day, including our days off. I get treatment after practices and after games,” Heiberger said. “Coach is really great about giving me days off of catching in practices. In traveling ball, I always caught every game, so I’m used to it and want to be back there.”

In 2011, Heiberger played in 50 games for the Bobcats, while hitting .229 and collecting nine RBIs. She also grabbed 30 hits on the year, including two home runs, three doubles and a triple.

Heiberger was also named the NEC Defensive Player of the Year last season and received the NEC Golden Glove award as catcher. Additionally, Heiberger led the 2011 squad with a .990 fielding percentage and 349 putouts.

Although Heiberger was Quinnipiac’s primary catcher in 2011, she split time with Paolucci and Jess Amenda behind the dish, and has only split a small amount of time as catcher with Kortney Kesses so far in 2012.

“I knew I had to step in there and make sure the team had confidence in someone that could catch every game,” Heiberger said. “Hitting-wise, as a team, we all had to work together to fill her spot; she was a great contributor to the team’s hitting.”

The Bobcats’ starting pitcher and team-leader in wins, ERA and strikeouts, Heather Schwartzburg, has adjusted to the change on the mound between catchers.

“There isn’t a huge difference in pitch-calling. Framing-wise, Ashley is really good at framing certain pitches,” Schwartzburg said. “Technically, the umpire should go where the ball hits the plate, and not where the catcher frames it, but [there’s] not a lot of umpires that do that. It’s really important to have a catcher behind the plate like Ashley, where she is very detailed with her frames.”

Schwartzburg and Heiberger were paired up on the mound and behind the plate for the majority of the games in 2011 and 2012; however, Paolucci would be slotted to catch for Schwartzburg from time to time.

“I think that since Ashley and I work so well, we’ve always been paired together,” Schwartzburg said. “She’s caught me in every game that I’ve pitched this year, and the majority of last year.”

Heiberger is expected to catch the final two games of the season: a home doubleheader against Stony Brook on Tuesday, before the playoffs begin later in May.