The Quinnipiac Chronicle • May 2, 2012 • https://quchronicle.com/30351/news/relay-for-life-successful-despite-may-weekend/

Relay for Life successful despite May Weekend 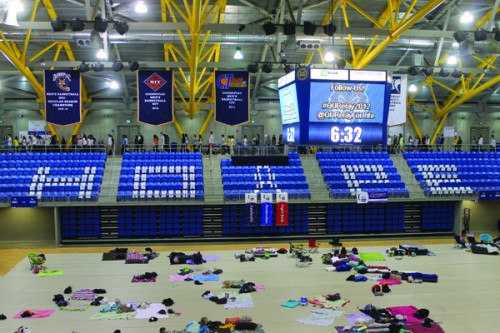 The Quinnipiac community continued to show its support for cancer research as 670 participants attended the university’s fifth annual Relay for Life, raising $72,123.19 for the cause.Walkers came out to the American Cancer Society-sponsored event on Friday, April 27 and walked well into Saturday morning. 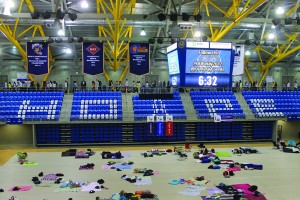 The Relay teams raised $64,000 before the event began, and raised a total of $72,123.19 after a night of fundraising and selling food, raffle tickets, bracelets and glow-necklaces. The event has raised more than $500,000 in its five years at Quinnipiac.

“I think it’s great for QU to come together and walk towards a common purpose,” freshman Neha Molhotra said.

Last year, Relay for Life fell on a normal weekend; however, this year the fundraiser fell directly on the opening night of “May Weekend,” Quinnipiac’s unofficial partying holiday. The funds were high, but came as disappointment for some after 2011’s bigger turnout. Last year’s event had almost double of this year’s participant and total.

“Our numbers, participant-wise and money raised-wise, are significantly lower because of the weekend [Relay] fell on,” said Caitlin Ziegler, co-chair of registration and finance for Quinnipiac’s Relay. “But per capita, we are at the same amount.”

While Relay for Life is not new to Quinnipiac, Friday marked the first time the event was held at the TD Bank Sports Center. The new venue allowed more space for activities that otherwise wouldn’t have been included in the Fitness and Recreation Center.

“It’s a whole different atmosphere for everybody,” said Christine Porzio, co-chair of survivorship at Quinnipiac’s Relay. “There’s so much more room to spread out and have everything, and we could have so many different [activities]. We could never have a mechanical bull in Burt Kahn.”

The new venue kept Relay participants entertained and busy throughout the night, helping to raise money for cancer research through paid activities, such as the mechanical bull, dodgeball tournament and raffles.

The walk began around the outer rim of the basketball side of the TD Bank Sports Center once opening ceremonies concluded.

The night started with a survivor lap around the “track” area, celebrating those who have won their battle against the disease. This special lap was followed by the caregiver lap, acknowledging those who help the cancer community each day. Once the two commemorative laps finished, the floor opened to all Relay teams to walk.

The peak of the night’s festivities is the always emotional Luminaria Ceremony, a continuous lap dedicated to commemorating those lost to cancer. Relay participants can purchase bags for the Luminaria Ceremony. Writing a message to the loved ones who were lost or to honor those who survived, participants lined the perimeter of the track with the white bags. During the lap, walkers placed glow sticks in each bag, symbolizing the cancer victims are not forgotten.

“It’s really so touching whenever I look as I walk around and I see, ‘in loving memory of my dad,’” junior Kriezel Ersando said. “It makes me think how lucky I am that I’m not one of the people who had to lose someone so important.”

Quinnipiac’s Relay for Life will continue raising money for the American Cancer Society until August 31. Donations can be made at www.RelayForLife.org/QU.