Around the world service in one year 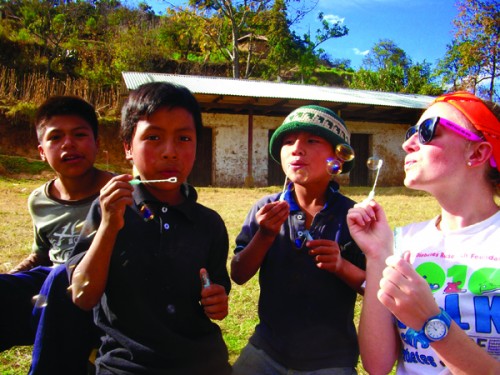 Avery David stood painting a village school in Guatemala. She was among friends, children and strangers, many of whom didn’t speak English. As her painting continued, she felt tugging on her hair. It was one of the school children. From then on, her hair became the children’s favorite thing to play with. The reason was not that they just liked hair; it was the color. 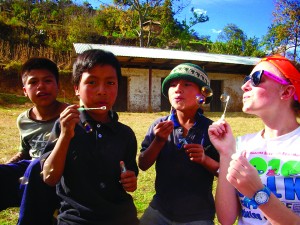 “The kids were there all the time. They were braiding my hair constantly because they had never seen blonde hair. It was so funny,” David said.

She loves children, so even though they had just been playing in the dirt, she didn’t mind. Because of her love for others, David took the opportunity to help, explore and research during The Albert Schweitzer Institute’s two-week trip to Guatemala in January.

That trip inspired her to enter Global Vision International’s “Volunteer around the world. For free” Competition. As the name suggests, the competition gives one winner a free year-long service trip at GVI expeditions around the world. GVI is a UK-based organization that has placed more than 10,000 volunteers in a variety of service projects worldwide during the past 15 years. There are fees for most trips, but if David wins, she would participate in many trips at no cost. There were more than 1,000 applicants for the competition and David is a top five finalist.

“She shoots high,” her boyfriend, Maxx McNall, said. “Once she finds something she really likes to do — in this case helping out those most in need — she will work her hardest toward that goal and she will ultimately work her hardest to achieve it.”

In the competition application, she had to send in a photo that fit a quotation, write why she deserves the award and create a travel guide to the service location of her choice. Once she advanced to the final round, David created a 90-second video explaining why she is the best candidate for first prize. She used some footage from her Guatemala trip, edited together with her narration for her entry.

The five finalist videos were posted on the GVI website and public voting to choose the winner is currently taking place on GVI’s facebook page.

Out of all the destinations on the year-long trip, David is most excited to return back to Guatemala.

“Right when she came back from Guatemala, she was a different person,” McNall said. “She wants to go back there more than anything.”

She recently got a job in the pediatric oncology department, working with child cancer-patients, at Children’s Medical Center.

“It takes a special person to care for kids with cancer,” McNall said. “Most of her clinicals that she has talked to me about I can tell she has lots of fun with the children and she has really fun stories.”

If David wins, the trip leaves in September 2013, and she hopes her new job will accommodate her service trip.

Voting on the competition is open on facebook.com/GVIfans until Friday May 18 at 5:00 p.m.