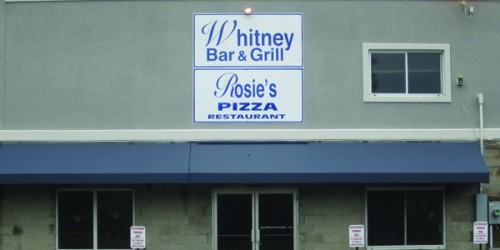 Local police arrested 12 underage drinkers and issued 71 infractions at Whitney Bar & Grille after a raid last Wednesday night. According to Hamden Police Captain Ronald Smith, 83 people were found to be under 21 inside the facility.

“Sporadically, the Hamden Police Department does this throughout Hamden at various bars,” Smith said. “We happened to conduct the check this past Wednesday and found 83 individuals underage.”

The 12 arrestees were charged with age misrepresentation for having fake identification on their persons as well as simple trespass. They were released on a written promise to appear in Meriden Superior Court on May 11. The other 71 students received infractions for simple trespass.

Although Smith did not confirm if the underage kids were Quinnipiac students, a list of the individuals involved was provided to the university. Quinnipiac has declined to comment on the matter according to John Morgan, associate vice president for public relations.

“Underage drinking is a serious problem,” Smith said. “What goes with that are kids driving drunk. Quinnipiac has had several students struck by vehicles. It is a public safety issue that will always need to be addressed.”

“Based on the fact that the police told me that for two weeks they’ve had two undercover officers, I would say that it was planned,” Gullo said. “They had all semester to do this, any of the places on the Whitney mile. But they chose, in my opinion, a very wrong night.”

Gullo and her family have owned the establishment for years, and, according to Gullo, have followed protocol with checking identification and turning away minors. Despite police assuring Gullo that she was following proper procedures for checking identification, Hamden Police will report their findings to the Liquor Control Commission of Connecticut.

The arrests and infractions pertained to underage individuals, which shows that those of age attend Whitbag less frequently. Senior Craig Roland, who was there the night of the raid, disapproves of the direction the bar has gone.

“Things were getting crazy there,” Roland said. “Almost nobody there was of age, and often we witnessed the under-21-year-olds getting into fights and breaking things. I talked to many seniors who wouldn’t go there anymore because of all the underagers there.”