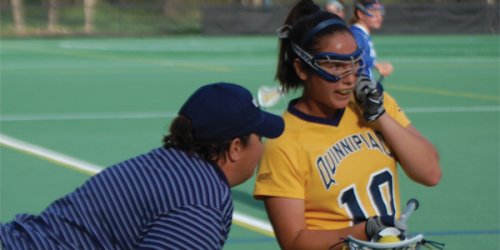 After winning the Northeast Conference tournament championship last season and earning a berth in the play-in game for the NCAA tournament, the Quinnipiac women’s lacrosse team looks to replicate that success this season. The Bobcats are trying to advance to the NEC championship for the fourth consecutive year.

Last season, the Bobcats defeated Mount St. Mary’s 15-3 in the NEC finals before falling to Navy, 20-5, in the NCAA tournament play-in game.

This season, Quinnipiac (8-7, 7-2 NEC) had a strong conference record, losing to only Sacred Heart and Bryant, but the Bobcats know that every team in the tournament poses a threat. 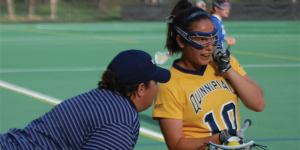 [/media-credit]“I think every team in the tournament is dangerous,” head coach Danie Caro said. “It is a new season for everyone – if you lose, you go home, and if you win, you get to keep on playing. We’re all working towards the goal of an NEC Championship, so we all have a lot riding on the outcome of the tournament.”

The Bobcats, who tied for first in the conference with Sacred Heart, dropped to the No. 2 seed after losing the tiebreaker. The Pioneers won the tiebreaker by defeating the Bobcats, 10-9, in Fairfield on April 13 and will host the tournament.

Caro said that while the Bobcats have to play on the road, their focus remains the same.

“There are pros and cons to both hosting the tournament and playing on the road,” Caro said. “While we are disappointed not to have the home field advantage for the tournament, our goal of winning the championship remains the same, and the location of the tournament is irrelevant.”

So far this season, Quinnipiac endured an up and down campaign in which they were 1-4 in the first five games before winning six in a row. Most recently, the Bobcats have split the last two games.

“I think we need to avoid dwelling on things outside our control and keep the focus on the things we can control,” Caro said. “We can’t look back at lost opportunities during the regular season. Instead we need to focus on the opportunities that lie ahead of us and how we can take advantage of those.”

The Bobcats have gotten steady contributions from many different players this season. Junior Sarah Allen leads the country with 64 assists. Senior Marissa Caroleo has scored a team-high 45 goals. Lianne Toomey and freshman standout Kyra Ochwat are third and fourth with 42 and 38 points, respectively.

Caro said that while these players have led the team for most of the season, they must continue to do so especially since it is playoff time.

“I think our entire team needs to play well this weekend if we hope to win the tournament,”
Caro said. “We have had so many people step up for us at different times throughout the season, but we really need to have contributions from everyone now that it’s playoff time. When we have been successful this season, it’s been because we have played as a team, so I think it will be critical for us to come together this week and really focus on us and how we can ensure that we get the best performance possible from everyone on Friday. If we do that, I have no doubt we’ll be playing for the Championship on Sunday.”

For Caroleo it would be a huge accomplishment to win consecutive championships.

“It would be amazing to graduate as back-to-back champions,” Caroleo said. “I am so proud of how far this team has come throughout the past four years of my career. I am excited to see the success that they will have in the future.”

Much like the women, the men’s lacrosse team is also looking to make some noise in the conference tournament.

The Bobcats (3-9, 2-2 NEC) have had a rocky season after bringing in 23 freshmen. The expectations remain the same even though the regular season had its ups and downs. The 2012 squad lost its first six games before going on a three-game winning streak, only to see that slip away with three consecutive losses. But it is not the regular season that matters; it’s the conference tournament.

“Our goal at the beginning of the season was to make it into the conference playoffs and eventually win a championship,” junior captain Basil Kostaras said. “Even though we’ve been through a lot of highs and lows, our main goal has never changed. This is all of the motivation we need.”

Freshmen Michael Sagl and Matt Diehl lead the team in points with 29 and 27, respectively. Sagl has compiled 15 goals and 14 assists, while Diehl has added 11 goals. Dylan Webster has scored a team-high 20 goals and recorded two assists, while Kostaras has 20 points.

Robert Morris and Bryant will play each other this weekend to determine who earns the No. 1 seed in the NEC playoffs and hosts the tournament. In the regular season, Quinnipiac lost to Robert Morris, 25-9, and Bryant, 9-5. In order to win they know they must fix their gameplan.

“Offensively against Bryant we need to limit our turnovers and execute the offensive sets in the right way,” Kostaras said. “If we do that there’s no doubt in my mind we’ll be able to breakdown Bryant’s defense. For Robert Morris, our offense needs to create more opportunities for themselves through the other facets of the game such as faceoffs, clears and rides.”

But in order for the Bobcats to win the tournament they will have to make sure their young guys are not intimidated in their first conference championship.

“For a freshman, a win-or-go-home environment can be very stressful and hectic,” Kostaras said.

Both teams know they have an opportunity to win the conference championship and they will both need to win on the road to do so.

“As upperclassmen we need to be able to lead through example and show the freshmen how to act as opposed to tell them how they should act,” Kostaras said. “It’s a lot easier learning by observing and experience in a high stress situation than it is for someone to just simply tell you how you should act.”