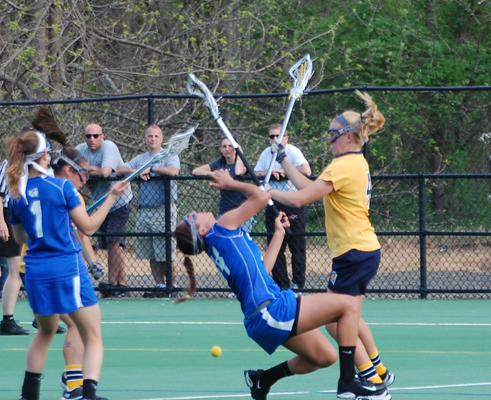 In a game that featured 49 fouls, the Quinnipiac women’s lacrosse team was able to battle past the physical play of Central Connecticut, and win 14-11 on Friday afternoon.

“It’s really hard to stay calm and composed when you’re getting cross-checked every time you touch the ball,” Quinnipiac head coach Danie Caro said. “A lot of teams employ that strategy with us because we are one of the faster teams. We just need to make sure we are moving the ball quickly before the contact comes and hopefully we will be healthy enough to make it thru the rest of the season.”

Moving the ball quickly they did as the programs leader in goals; Marissa Caroleo put the Bobcats on top 1-0 by scoring just 17 seconds after the opening draw. 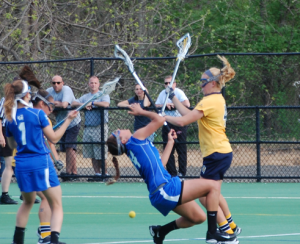 [/media-credit]
Caroleo finished the game with five goals off of 10 shots including seven of which were on target. Caroleo is now just five points behind tying Katie Latonick’s all-time points record, which was set in 2010.

Quinnipiac had two three-goal scoring runs in the first half, which put them up 7-2 with 15:01 remaining in the half. They would score two more goals to take a 9-5 lead into the break.

“I think we came out really intense. That was a big difference for us. It’ something we’ve been working on since last season,” Caro said. “It’s still something we have to develop in the middle of the game. But we were happy with the way the game started off and we just need to stick to our game plan for the 60 minutes. It’s never going to be easy. Teams aren’t going to roll over and just let us take the win. We’ve got to keep working hard for 60 minutes and take what we want if we want to take the victory.”

Central Connecticut (7-8, 5-3 NEC) opened the second half with a goal by Meaghan Mccurrey on a free position shot 7:53 into the half to narrow the deficit to three. But Quinnipiac (8-6, 7-1 NEC) answered with its third three-goal run of the day.

Following the third goal, the Bobcats controlled possession in the Blue Devils zone and were looking to kill some time off the clock. After passing it around the outside of the crease a few times, Caro called Caroleo, who had possession of the ball, over to the sideline. Caroleo gathered her quick 15 seconds of instructions, turned around and screamed out “Viper.”

She then threw the ball over to fellow senior Devon Gibney who waited for her to cut into the crease and hit her in stride for the goal and the longest goal streak of the day.

“I told her it was a big possession and we needed to work the clock,” Caro said when explaining what she told her star player. “When we were ready to go into viper I needed her to get me a goal. That kid listens to everything we say and she’s very coachable.”

Quinnipiac dominated time of possession in the game and controlled the tempo, especially in the first half, making the Blue Devils capitalize on the few chances they got.

“We always try to be a little more disciplined and try to be patient and work for good opportunities,” Caro said. “We knew that Central is a team that’s very efficient with their offensive possessions so we wanted to make sure that we were using the clock and having good possessions and finishing every possession with a good quality scoring opportunity.”

The Blue Devils began to get opportunities late in the second half and finished the game on a 5-1 run. But the clock ran out on the Blue Devils as Quinnipiac kept the ball in their zone for the final two minutes, denying any chance of blowing the 14-11 lead.

Quinnipiac will head into it’s final game of the regular season on Sunday vs. Bryant at noon where Caroleo and Allen will look to add to their career achievements and capture the No. 1 seed for the Northeast Conference tournament.