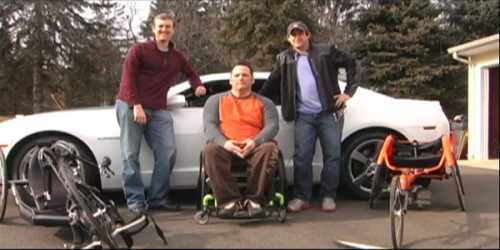 Scott MacDonald describes himself as many things: a triathlete, road racer, professional poker player, an employee of the U.S. Department of Veteran Affairs and a paraplegic. One word he does not identify with is handicapped. 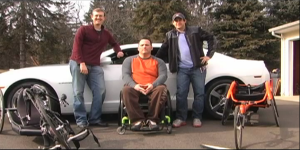 Ryerson Stinson, a student in the Masters of Occupational Therapy program at Quinnipiac, took it upon himself to solve any misconceptions people may have about occupational therapy by producing the film “Scott MacDonald’s Journey,” which will appear on the occupational therapy website, BrOT, on April 22. He said his goal was to make a video with his friend Alex Birsh, a 2011 Quinnipiac alumnus, to answer one difficult question: what really is occupational therapy?

“It bothered me that people work with OTs or know an OT, but they do not know what they do,” Stinson said. “What OT means to me is helping someone through their everyday occupation. An occupation is something meaningful to someone’s life like a leisurely activity or activity of daily living like going to sleep, getting dressed, showering and taking care of yourself.”

Stinson said he turned to his professor, Tracy Van Oss, who put him in contact with MacDonald, whom she described as someone she often turned to as a source of assistance for her students.

MacDonald said since his accident, he has been speaking on behalf of spinal cord injured persons as a mentor to new patients and students. He believes it is his duty as someone with a spinal cord injury to teach others what life is now like for him.

“When I met Scott he was so articulate and his attitude and overall knowledge was incredible,” Stinson said. “He knows the purpose of therapy and knows the misconceptions. The whole experience of watching him in his story and his triumphs through all his difficulties, I mean, how can you not be drawn to that?”

After a visit with his family in Connecticut in November of 1998, MacDonald was returning home  to Virginia, where he was stationed in the military, when he passed a severe accident on the New Jersey Turnpike. After stopping and offering his assistance, MacDonald said he was high on adrenaline, but that adrenaline wore out. When he was seven miles away from the Chesapeake Bay Bridge, MacDonald fell asleep at the wheel and was ejected out of the passenger side window of his vehicle. He broke seven vertebrae and became a paraplegic.

After the accident, MacDonald said he knew he could eventually get through his daily life with enough training, but was fearful of not being able to do what he loved to do.

“Occupational therapy changed my life because here I was thinking I am going to be dependent, I don’t know who is going to take care of me, and what I am going to have to do,” MacDonald said in the video. “By the time I got out of the hospital, I was like, I want to live by myself, I can be by myself, I can take care of myself. Without the occupational therapist coming there and telling me I am going to teach you how to live, and smile about it, there is no way I could be smiling right now that’s for sure.”

One of MacDonald’s greatest successes, he said, was getting his driver’s license, which gave him a sense of independence.

“The first time I got in the car I couldn’t go over 50 mph on the highway because I was terrified, but I was free and no one could tell me I couldn’t go somewhere,” MacDonald said.

Stinson looks to MacDonald as more than just the subject of his video, but as something greater.

“When he is in a chair, I look up at him,” Stinson said. “If I had to sum up our relationship, I’d say he is a role model. He is a successful person regardless of what he has accomplished in his wheelchair.”

The greatest challenge for OT and PT students is that they need to work together and realize they both have valuable jobs, MacDonald said. Without the physical therapist, the occupational therapist cannot succeed and visa versa.

“The real thing that it all boils down to is mastering your independence,” Stinson said. “You don’t understand how important it is until it’s gone.”

Stinson’s definition of occupational therapy may be difficult to understand, as it is an umbrella for everything a person does in their life, he said.

“The way we think of it is very holistically and that a person is not just a bunch of parts,” Stinson said. “People are unique and you have to approach everyone completely differently. Scott, for example, isn’t just a spinal cord-injured person, but a person with a spinal cord injury.”

The reward of the video is priceless, Stinson said, and reminds him of why he has endured this long education as it is all to help people achieve happiness.

Van Oss said the video will be helpful to those in and entering the field of occupational therapy.

“I think the video helps to make our profession widely recognized and helps to facilitate people in understanding what we do and the power of occupational therapy,” Van Oss said.

Stinson’s role in the film was directing, while Birsh filmed and edited the project, which he completed over a few months during evenings and over weekends, while he was not working at his current job with Major League Baseball Productions.

“I made sure the quality of the video was up to the quality of our subject, which was tough to do as Scott and his story deserve the best,” Birsh said.

Birsh, who was a journalism student, said he never grasped the impact of OT until he witnessed it firsthand when he went to see Scott. He said the experience gave him a new outlook on the profession, as well as in life.

Stinson said that they are not looking for a certain number of YouTube views or royalties for their video, but something greater.

“Our greatest collective wish is to have the video reach as many people that need it,” Stinson said.