This is Me: God in her heart 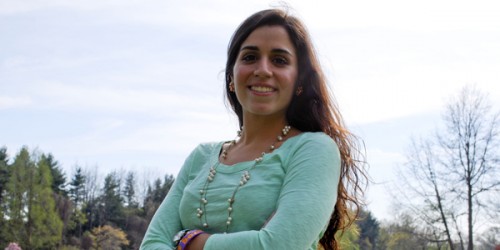 After a less-than-open mindset through her childhood, Elba Angulo opened her heart to God two years ago. Now she radiates happiness every day.

Elba Angulo’s eyes widen and she leans forward in her seat, passion exuding from her body as she talks about God. It’s not often you come across someone this spirited about anything, let alone their faith.

“Every day I live life with God on my mind, God in my heart,” Angulo said. “I try to do things that would fulfill His purpose that He has for everyone here.”

Angulo is among the rare individuals in her age group enthusiastic about her faith. According to the Social Science Research Council, 64 percent of college students cut off their church attendance after arriving at college. Nineteen percent report that religion is no longer a major presence in their lives.

But Elba, along with fellow occupation therapy major and friend Kelly Segit, buck this trend.

“Especially in college it’s easy to get pulled astray because you have so many other distractions vying for your attention,” Segit said. “But Elba keeps her focus on God and puts Him in the center of everything she does.”

Angulo came a long way to find this happiness and peace in her life.

“There was something greater for me than the way my life was going, I was going in such a negative direction,” Angulo said.

As a child, Angulo attended church every Sunday, but she says she sat in a pew and didn’t get much out of it.

“I would really feel no connection to God,” she said.

When she was 11 years old, her father was diagnosed with lung cancer. Three years later, he lost his fight with the disease.

“That really hit home for me, I was like, ‘there’s no God, he does not exist,’” Angulo said.

Looking at her religious devotion now, it is impossible to imagine Angulo convincing herself God did not exist. But she met someone in high school who brought her out of that mindset.

That person was Brandon Eloy, with whom Angulo has had a close relationship for several years.

“He opened my eyes that it was not God’s fault that he passed away, there was a purpose for Him taking him out of my life,” Angulo said.

Eloy was the one who opened her up to the idea of following Christ, to “the idea of there being something more than just the day-to-day life we live,” Eloy said.

It has been two years since Angulo fully embraced her faith. But last fall, after a falling-out with Eloy, she had a realization.

“Something hit me that I was missing something in life,” she said. Angulo realized she wanted to become baptized.

On November 13, 2011, Elba Angulo was baptized. Though the process varies across denominations, Angulo was fully immersed in holy water to symbolize a formal union with Christ.

“It’s like my outward testimony of what God is doing internally to me,” she said. “I realized that I needed Christ, I needed him, I was broken and I needed him to heal me and help me and be with me. And this was a step into that.”

Despite knowing in her heart that this was the right move, she said she was still nervous on the day of the baptism. There were about 15 others baptized the same day, but Angulo went first. One man helped her into the baptism pool, and another waited in the pool to baptize her. As she took the hand of the man who would baptize her, tears began to form in her eyes.

“Oh my gosh, bawled,” Angulo gushed. “I don’t know what it was, just a rush of emotions, like, ‘Oh my gosh, I am beginning my life with Christ again.’

“As soon as they lifted me up, it felt like a huge weight lifted off my shoulders. Like everything’s going to be OK, he’s here with me and that’s all that matters.”

Angulo has since rekindled her friendship with Eloy. He says he has seen a noticeable change in her since she began following Christ.

“There’s no longer that emptiness that existed before,” Eloy said. “Her friends see the different glow in her eyes for sure.”

Angulo said she finds joy in sparking curiosity about her faith in others.

“People see what I’ve done with the baptism thing and they always ask me about it,” Angulo said. “That curiosity is where it all begins. They begin to ask questions, they begin to wonder ‘what is this, what is she doing, why is this turning her life around?’”

Eloy sees this as well: “People are seeing not a different girl, but something different inside her that is propelling her forward in life.”

That curiosity permeates all of the relationships in her life, even with her mother.

“I see God through little things,” Angulo said with a hint of a smile. “Like, my mom doesn’t know Christ like I do. But she came to service with me and she kind of saw a little bit of what I’m seeing. So I saw God beginning to work with her.”

She works with others in little ways, too, hoping to be an example for her friends and peers.

“Just being there to talk, telling them no, it’s not the end, God has something better for you, kind of lifting their spirits.”

“You don’t have to have known her very long or know her very well to see that she’s different,” Segit said, “She stands out because she is so full of flavor and energy and has an undeniable spark and glow that draws people in.”

Angulo lives her life with an exuberance that is rare among our generation. She considers her purpose in life to be lifting up those around her and hopefully bringing them as close to God as she is.

“But it’s not something I can force,” Angulo said. “All I can do is be an example of Christ, and what he’s doing with me.