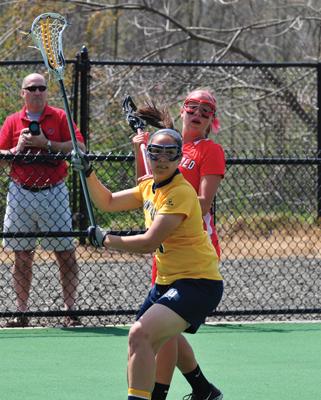 If you ask Marissa Caroleo what the highlight of her lacrosse career has been at Quinnipiac, she wouldn’t tell you it was being named Northeast Conference Player of the Year. Nor would she say it was winning the NEC Rookie of the Year award or breaking the all-time record for goals.

For the senior co-captain of the first place women’s lacrosse team, team goals hold precedence over individual accomplishments. So, her top moment as a Bobcat was winning the NEC Championship game last season, as her team routed Mount St. Mary’s 15-3. 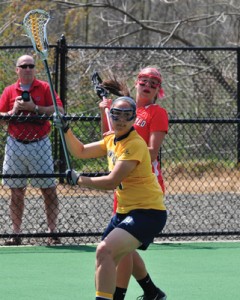 [/media-credit]“I don’t really focus on my own personal stats,” Caroleo said. “It’s just me helping out my team and getting a point on the board for Quinnipiac and that’s all that really matters.”

Getting a point on the board is something that has become second nature to her teammates, as Caroleo has done so 165 times over the past four years, which is just 10 points shy of the record. Of those points, 136 have come off of goals, which is a record she set earlier this season.

“For her to get that success with her points and goals is an honor to me as I was a part of it and got to watch her through it and help out every once in a while with assists and what not,” senior co-captain Devon Gibney said. “I’m glad I could be a part of her accomplishment and help out.”

Gibney came to Quinnipiac in the same recruiting class as Caroleo and has helped be a one-two punch for the Bobcat attack, starting in games since her freshman season.

In last year’s conference tournament, Gibney was named tournament MVP, as she tallied 14 points in two games, including six goals in the finals.

“That was a great honor because that game was so exciting with everything that was happening and all of the emotions with our team,” Gibney said. “I got to represent our team in the tournament and I felt like my hard work did pay off.”

Gibney has kept up with Caroleo and helped fuel the offense since she stepped on the field. Last season’s Most Outstanding Midfielder, as awarded by the team, has tallied 155 points in her collegiate career.

“Every time I’ve been a head coach at different institutions, there is always one player that stands out above and beyond,” Quinnipiac head coach Danie Caro said. “I think I’ve been particularly blessed here to have two in the same class.”

While both players at the beginning of the season looked to have an equal chance at breaking the points record at Quinnipiac, Gibney has fallen behind. But she has done so to benefit the team.

Gibney has focused more on defense this season than past ones, and has become the best shutdown midfielder in the conference, Caro says. Gibney ranks fourth in the NEC in draw controls.

“Her offensive numbers are a little bit down from where they’ve been the last couple of years, but she’s actually become more valuable to our team in doing that,” Caro said. ”To Devon’s credit, she had enough faith in us to understand we were asking her to do something because we knew she could do it, because we knew it would be best for the team. Even though it might not be best for Devon personally, in terms of getting awards, she is doing what we need her to do for the team.”

Caroleo has remained consistent with her attack, ranking second in the conference with 2.92 goals per game. She scored a career-high eight goals earlier this year when Quinnipiac defeated St. Mary’s (Calif.) 18-14.

“Here at Quinnipiac, I think undoubtedly that Marissa in the most decorated player this program has ever had,” Caro said. “I think obviously we still have accolades to come for both of them but just in terms of what they’ve achieved here at Quinnipiac, they’ve done more than any other class just about and as individuals they’re both right up there.”

Hidden behind the success of Gibney and Caroleo is a junior who is breaking records herself. Sarah Allen has been the Chris Paul of the women’s lacrosse team and already eclipsed the 100-point plateau for her career. Allen broke the program’s single-season record for assists earlier this season and currently has 56 on the year, which ranks first in the country and is 10 more than any other player.

“Sarah is a huge help on the attack. A lot of our scoring opportunities come from Sarah; it’s great to have her,” Caroleo said. “I’ve loved the past three years that I’ve had with her.”

Allen shared Caroleo’s milestone goal earlier in the season as she assisted on the score, which put her co-captain as the sole leader in goals and was also the 100th point for Allen’s career.

The co-captains have led a young team, which features just four seniors, to a 6-1 conference record going into the last weekend of play. Although they may not be the best vocal leaders according to Caro, they have tried their best to do so as their play is the definition of leading by example.

“They’ve always been great leaders by example since the day they stepped on campus as freshmen,” Caro said. “I think this year has been tough on them because they’re not comfortable at speaking and being that vocal leader but they’ve done it because they’ve recognized that that’s what the team needs from them.”

With just two games remaining in the regular season, Caroleo isn’t thinking about getting the points record. Instead, getting the No. 1 seed for the conference tournament is the focus.

Quinnipiac will look to repeat as NEC Champions in this year’s tournament as Caroleo will look to go out as a champion, with a new favorite memory of Quinnipiac lacrosse.