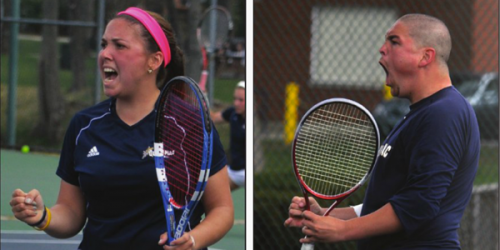 The message is simple: play hard on every point. Quinnipiac head coach Mike Quitko has told everyone on both the men’s and women’s tennis teams that they need to give 100 percent in every match they play in.

“You could hit the perfect shot and lose the point,” Quitko said. “It’s important that they understand that they have to hit every shot because you don’t know the ones you’re going to win.”

With a spot in the NCAA Tournament on the line, every point is crucial. 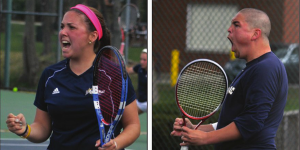 [/media-credit]Quinnipiac’s men’s and women’s tennis teams head to Mercer County, N.J., this weekend in the Northeast Conference Championships, a place they are familiar with.

The men have reached the conference finals two of the past three years, which includes a 4-1 loss to Sacred Heart last year.

“It stinks to lose, especially in the finals,” said James Kwei, the only senior on either team. “We were really close. We had a lot of young guys, so they didn’t know what to expect. Everyone’s back, so there’s that one push to make one last championship special.”

The women are the defending champions and have brought back the title six of the past eight years. They are the No. 2 seed in this year’s tournament, and could face top-seeded Fairleigh Dickinson in the finals for the second straight year.

“We know we can beat FDU,” junior co-captain Rachel Cantor said. “FDU is our biggest rival. We played them in season, had a tough loss, but these girls are hungry to win.”

The men are the No. 2 seed and also behind Fairleigh Dickinson and will open the tournament against No. 7 Robert Morris, while the women will face the winner of the No. 7/10 match between Saint Francis (Pa.) and St. Francis (N.Y.) Friday at Mercer County Tennis Center.

“Both teams have been preparing the entire season for the conference championship and winning that would put us into the NCAAs again,” Quitko said. “Both teams have what it takes to get there and to win, but then it becomes a mental game.”

Kwei has recorded 22 overall wins in both singles and doubles play this year, including a 6-2 record with doubles partner Andrew Weeden. The two have won four of their last five matches, including an 8-4 victory vs. Sacred Heart in the No. 1 doubles heat on April 10.

“Let your play do the talking,” Kwei said. “Stay calm, have the right attitude. If you’re going in nervous, you’re going to play nervous and not play very well.”

When Kwei was a sophomore, he and the Bobcats won the title against Sacred Heart, 4-3. Two years later, he is the only senior on a team that features five underclassmen.

“It’s a little different because every year we’ve had a couple of seniors on both teams, and now that I’m the only one, it’s a bit of a weird feeling knowing that I’m the only one with something to lose,” Kwei said. “I just want to win. It’s my last year. I’d like to go out on top and I’m going to do everything I can to win.”

While he only has control over what he can do, he will look to some of the younger talent on the team. Freshman Eric Ambrosio has won eight of his past 10 matches, while he and doubles partner Garrett Lane have posted a 4-2 record.

“They’re getting hot at the right time,” Kwei said.

So is the women’s team. The women have won three of their last five matches prior to Tuesday, including a dominant 6-1 win vs. Sacred Heart.

The Bobcats have overcome a lot of adversity on the court, including losing reigning NEC Rookie of the Year Juliet Labarthe, but have made up for it with a strong freshman class of three active players: Michelle Dassa, Jackie Raynor and Ariana Launie. There are more newcomers on this year’s team (six) than players who won the title last season (four).

“Winning it last year, I have no words for it,” Cantor said. “That’s our biggest thing (junior co-captain) Sarah (Viebrock) and I are trying to tell them. You weren’t there last year, but it’s a feeling that you won’t ever feel, so it would be unbelievable.”

Dassa and Raynor have the most wins in the conference as a duo, as they have posted a 22-8 record throughout the year.

“Michelle dives for balls, slides for balls, is sometimes sick but she’ll play. Jackie and her as a doubles team have stood out,” Cantor said.

Cantor and Viebrock are also doubles partners and have posted a 12-3 record as a duo, but they have been trying to help their teammates stay calm and motivated in preparation for the big weekend.

“Sarah and I have been trying to pump up the girls, like we send them a text the night before with a motivational quote and then we follow-up by saying what to wear,” Cantor said. “They look up to Sarah and I both on and off the court.”

Quitko said that despite both teams not being the top seed in the tournaments, they are a force to be reckoned with.

“We’ve been to the NCAAs; we know what it’s like to win the conference,” Quitko said. “It’s going to take the mental capability of being ready to put every bit of effort into it. Don’t count us out.”

The women’s team has been anxious to get to the tournament, Cantor said. She said that the team has the skill to win it, but it comes down to the heart everyone puts in and how motivated everyone is.

“We’re playing for something bigger than ourselves this year,” Cantor said. “We’ve had to deal with some adversity off the court, and as much as we want it for ourselves, we want it for the coaching staff, too.”