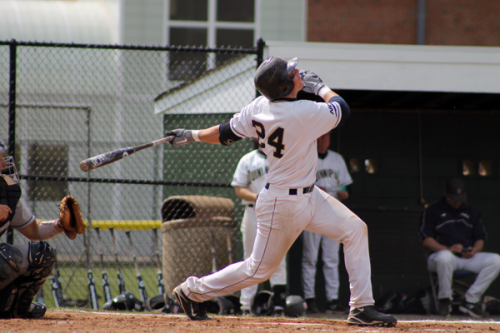 Quinnipiac (6-27, 5-15 Northeast Conference) routed the Mountaineers on Friday, 17-3, and then swept the doubleheader on Saturday. The four-game sweep would have been the Bobcats first since March of last season, a feat very rare nowadays according to Quinnipiac head coach Dan Gooley.

“I think if you probably look at the history of this league in a four-game series, if you see teams sweeping teams in four games, that is highly unusual” Gooley said. “It’s very hard to do. Generally speaking, these clubs are evenly matched.”

Things started to spiral out of control for the Bobcats in the fourth, where Quinnipiac entered the inning down 2-1 after two solo shots from the Mountaineers.
[media-credit name=”Katie O’Brien | The Quinnipiac Chronicle” align=”alignnone” width=”300″] 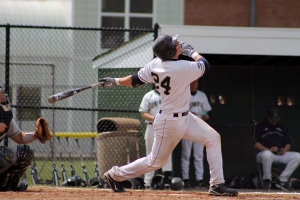 [/media-credit]
Mo Moriarty, the designated hitter who cracked the first of the two homers for Mount St. Mary’s, led off with a bloop double to right that fell just beyond the outstretched hands of fully-extended Forrest Dwyer, the Bobcats’ second baseman. After a bunt single that advanced Moriarty to third, Sam Nott singled him in. The Mount picked up another run on a bases-loaded single and then a sac fly that brought in Nott.

Quinnipiac starter Ryan Walsh settled down after the inning, retiring the side in order in the following two innings.

“I started getting a little more into a groove with my curveball,” Walsh said. “I just started gaining more confidence throughout.”

The Bobcats started chipping away at the lead, picking up a run in the bottom of the fourth and then another in the sixth. Mount St. Mary’s (12-27, 5-15 NEC) tacked on two more runs in the seventh on three hits.
In the bottom of the eighth inning, pinch runner Mike Blumenthal was picked off at first base. The mistake proved costly as Quinnipiac put together two more hits that would have scored Blumenthal. They did however salvage one run to bring the score to 7-4.

In the ninth the Bobcats battled, refusing to do down quietly. Junior Jesse Ullrich led off with a frozen rope into left field. The ball rolled under Nott’s glove, letting Ullrich reach second. Mount St. Mary’s then made a pitching change, calling on Nick Riley to shut down the Bobcats for the final three outs.

The next play was nearly a mirror image of the last, this time on the other side of the field. Quinnipiac’s Vincent Guglietti stepped up to the dish and laced one into right. Mountaineers right fielder Ryan Owens couldn’t decide whether to play the ball off of a fly or a bounce and got caught in no man’s land. The ball bounced under his mitt and skipped across the grass towards the right field fence, allowing Ullrich to score and Guglietti to coast into third. Guglietti scored on the next at-bat as senior Kyle Nisson grounded out to the shortstop, cutting the lead to 7-6.

However, that’s as close as the Bobcats got as Riley retired the next two Quinnipiac batters.
Thomas Williams picked up the win for Mount St. Mary’s improving to 3-2 on the year.

Walsh was saddled with the loss for Quinnipiac, surrendering five earned runs over six innings. He also struck out seven.

The Bobcats finished the contest with a whopping 17 hits but also stranded nine runners on base. Quinnipiac left two on base in the fourth, and then stranded three more ducks on the pond in the sixth.

“It always comes down to somebody’s got to get a big hit and we were just a little short today,” Gooley said. “Almost close but no spaghetti.”

Seven different players had multi-hit games for the Bobcats, including sophomore Zak Palmer who was 2-for-5 on the day, capping off an 11-for-17 series.

“This was a really good weekend for us hitting-wise,” Palmer said. “Today we just didn’t get the right hits at the right times.”

Quinnipiac had leapfrogged the Mountaineers in the Northeast Conference standings with the three straight wins on Friday and Saturday. However, the loss puts the Bobcats and the Mount in a tie for eighth place.

The Bobcats will visit the University of Hartford on Tuesday in a non-conference matchup.