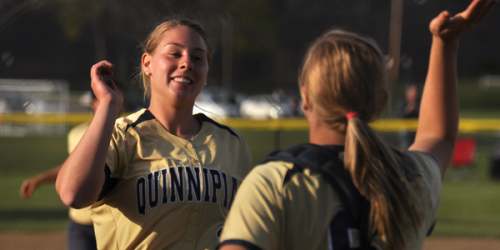 After dropping its first home game of the season 5-4 in extra innings, the Quinnipiac softball team scored eight runs in the first inning of game 2, to split a doubleheader with Wagner on Saturday. The Bobcats won game 2, 9-2, and lost game 1, 5-4, in nine innings.

The Bobcats forced two pitching changes before an out was even made in the bottom of the first inning in game 2. After the first two batters reached on walks, Alex Alba launched a double into left field to drive in the first run of the game. 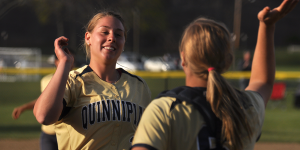 Wagner (15-27, 4-8 Northeast Conference) then replaced starting pitcher Olivia Zwick with Samantha Bedker. Mina Duffy, Nikki Barbra and Kortney Kesses then hit three straight RBI singles to increase the lead to 4-0. Bedker was then taken out for Ashley Rollins. Rollins couldn’t get Bridget Figmic out as she hit an RBI single up the middle and advanced to second on the throw, with Barba advancing to third. The No. 8 hitter in the lineup, catcher Ashley Heiberger then came up and rocked a three-run home run off of the scoreboard in center field for an 8-0 lead with no outs in the first inning. Rollins would finally retire the side after allowing one more Bobcat to reach on a walk.

The Seahawks would get two runs in the fourth as starting pitcher Heather Schwartzburg walked a batter with the bases loaded. Vanessa Lenart hit a sacrifice fly later in the inning to make it an 8-2 game.

Quinnipiac would tack on an insurance run in the bottom of the fifth.

“It’s very nice pitching with an eight-run lead, you don’t want to compromise the plate but you also know if there is a hit here and there, it’s okay,” Schwartzburg said. “It also lessens the pressure on the defense letting them stay cool, calm and collective knowing that we’re ahead.”

Schwartzburg picked up the loss coming in on relief in game 1. She came in with the game tied at 4 in the sixth inning and struck out the first four batters she faced. But in the ninth inning, Schwartzburg started off the inning with a leadoff walk. MacKenzie Alfaro then sacrifice bunted to third to advance the runner to second. Ashley Olson followed with a single to center field to drive in the game-winning run.

Olson’s hit was the only hit off of Schwartzburg in game 1, who picked up the loss. In the two games combined, she pitched seven innings, allowing three earned runs off of three hits while striking out nine and walking four.

Quinnipiac (19-12, 6-5) fell behind early in game 1, as Katie Alfiere gave up three runs off of three hits in 2 1/3 innings. Wagner increased their lead to 4-0 as they picked up another run off of Christy Cabrera who came on in relief of Alfiere in the third.

The Bobcats answered in the bottom of the fourth with four runs of their own which was started by Alex Alba, who hit a solo home run to lead off the inning.

Kesses and Heiberger led the Bobcats on the day with three RBIs each.

After having just five hits in game 1, the Bobcats offense woke up with six hits in just the first inning of game 2.

“It comes down to focus. We told the players that we need to keep the pressure on and keep the quality at bats going,” Quinnipiac head coach Germaine Fairchild said. “We started to get anxious and attacking the pitches that were out of the zone (in game 1.)”

Judy Betz, who came in in the fourth inning for relief of Seahawks pitcher Bedker, pitched six innings of one hit ball to pick up the win.

“Give Judy Betz credit, she has a really good drop ball. Even going to the front of the box, she seems to still be able to adjust the pitch and make it drop before it even gets to the hitter,” Fairchild said. “We had a heck of a marathon game against her last year that went I think 14 innings. She pitched every inning and kept us off the board for most of us using drops and getting ground balls and getting batters to swing at pitches out of the zone. That’s her game and she did it well today.”