This is Me: Pumped up 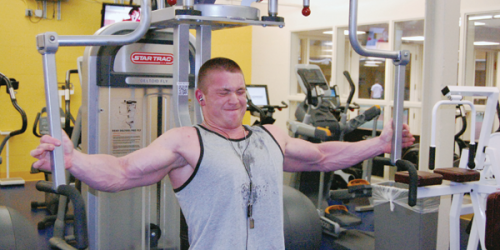 Tyler Smith pushes 245 pounds using his pectoral muscles. His workouts are only half the battle to achieving his goal of becoming a professional bodybuilder. The other half lies in his diet.

Tyler Smith was the fat kid in grade school. Other kids teased him, and the resulting depression lasted until his sophomore year at Quinnipiac. It got so bad he would drink a bottle of Jameson, while sick with mono, to try and make himself feel better. But now, alcohol-free and following an intense diet, he wants to be a professional bodybuilder.

Inspired by Anthony Monetti’s appearance on MTV’s True Life: I Want a Perfect Body, Smith changed his diet and started exercising at 12 years old. Nearly 10 years later, both activities have evolved to extreme levels, like eating 5,000 calories a day and leg pressing 1,000 pounds.

Smith’s roommate, Cory Maffucci, is video documenting his journey for him so he can do for someone else what Monetti did for him.

“I want to give back, and this (pointing to his favorite bodybuilding magazine) is my way of doing it,” the Lake George, N.Y. native said. “I want to help possibly inspire someone else like he inspired me.” 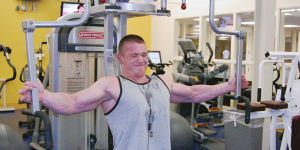 [/media-credit]Tyler Smith pushes 245 pounds using his pectoral muscles. His workouts are only half the battle to achieving his goal of becoming a professional bodybuilder. The other half lies in his diet.

The 21-year-old junior weighs a lean 215 pounds at 5-foot-9 with 10 percent body fat. His skin is paper-thin, just what the judges are looking for. After finishing fourth in his first bodybuilding tournament last spring, he motivated himself to train for a year to try and earn a sponsorship June 2 at the National Physique Committee’s Atlantic regional contest. He expects this event to conclude the documentary.

Shamelessly, he will strut on stage in revealing trunks and pose for the crowd. It’s all about how much your veins pop (striation), he said. “[The judges] want to see every single striation in your ass that they possibly can. Striated glutes.”

His mother, Denise, and training partner, MJ Lamie, can attest to his self-motivation.

“That’s the thing that I first noticed about him,” Lamie said, referring to his self-motivation. “Tyler was the first person to ever keep up with me in a workout in my whole entire life, consistently, day in and day out.”

While not forgetting to mention that Tyler finished in the top 100 of a marathon after he took up running track in high school, his mother said, “When he sets his mind to accomplishing a goal, he is like no one I’ve ever known in accomplishing it.” 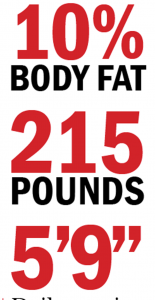 After he chose Quinnipiac over other top business schools such as Bryant and Bentley to study accounting, maintaining his scholarship proved to be a difficult task in his first semester. He joined New Blue Rugby and later caught mono. Instead of getting the appropriate treatment, he turned to alcohol instead.

“That was my way of dealing it; I had a lot of stress, lot of anxiety about my grades because I had a scholarship to maintain,” Smith said. “Eventually it just got to be too much, I couldn’t deal with it, I was having a mental breakdown.”

In the middle of October on a rainy day, he made a phone call that he considers a turning point in his life. “Mom, come get me. I need to get out of here. I can’t do this anymore,” he said on the phone.

During the long ride home, he thought he might never return to Quinnipiac.

After seeing a therapist over winter break, he came back to Hamden in the spring, taking the same courses as he did in the fall, without depression but still with an urge to drink. He completed the courses but lost his scholarship by a fraction of a point.

In the fall of his sophomore year he started hating school and was very close to dropping out so he could pursue a career in bodybuilding, but his mom talked him out of it.

Then things started getting better for him. His professors and textbooks motivated him to follow his passion, especially Tim Deenihan, a part-time faculty member and professional actor/artist.

“He inspired me to follow my passion, but he also taught me a lot,” Smith said after taking Deenihan’s QU201 course last fall. “He got me to think in a bigger way, and really pay attention to what’s going around me in society.”

Deenihan said his class challenges a lot of established notions about American society.

“[Tyler] was an engaging, excited member of the class,” he said.

Smith’s grades have increased significantly and led him to participate in Quinnipiac’s five-year MBA program.

“This school, as much as I hated it in the beginning, it really shaped me and transformed me,” said Smith, who is an ACE-certified trainer. “It helped bring out this passion that I found, and I may not have found this had I not been here, and had these professors and these people who mentored me.”

He said he already has taken steps to finding out how to give back to Quinnipiac when he becomes an alumnus and, hopefully, a professional bodybuilder.