After more than 30 years, the Complex will be getting a much-needed facelift.

There are currently no specific construction plans set in place yet, but the university is in the process of experimenting with vacant apartments to figure out the most effective plan, Keith Woodward, associate vice president for facilities operations said.

“We want to improve it, it’s been determined that we should improve it, but we’re still trying to work out how we’re going to improve it, which is where we are,” said Joseph Rubertone, associate vice president for facilities administration.

John Morgan, associate vice president for public relations, issued a statement on behalf of the university.

“No formal plans to renovate any of the residence halls on the Mount Carmel campus have been finalized,” Morgan said. 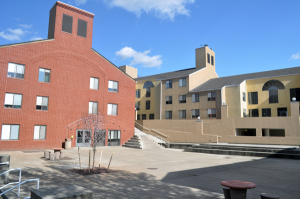 [/media-credit]The Complex, which houses sophomores and transfer students, was built in 1981, and is modeled after the Olympic Village in Calgary, Canada. It is comprised of three residential halls: Bakke Hall, Founder’s Hall and Sahlin Hall, with 30 six-person apartments. Each apartment has a living room, kitchen, bathroom, linen closet and three double-bedrooms with built-in furniture.

“It is a unique floor plan with the built-ins, and that doesn’t necessarily work as well today as it did in 1981,” Rubertone said.

Facilities has been using eight unoccupied apartments in Bakke Hall as testing models to experiment with redesign plans, according to Woodward.

The Complex presents facilities with challenges due to the limited amount of space in each apartment, Rubertone said.

“The university is always looking at options to try to improve the residential experience,” Rubertone said. “At this point Complex has been the focal point because it is a little more dated and a little less flexible than the rest of the buildings.”

Sophomore Victoria Charbonneau lives in Founder’s, and said that she does not mind where she lives, but suggests making bigger bedrooms.

“The rooms are kind of small and the beds are the worst part,” Charbonneau said. “It was a pain last semester climbing the bookshelves and window to get up to my bed, but this semester I have the bottom bunk so I definitely enjoy that much more.”

Since spring break, facilities has already begun to make aesthetic changes to the Complex.

Smaller, new trees have replaced the overgrown trees in the courtyard planters because the brick was causing an unsafe situation. There are also added tables and chairs for outdoor seating, Woodward said.