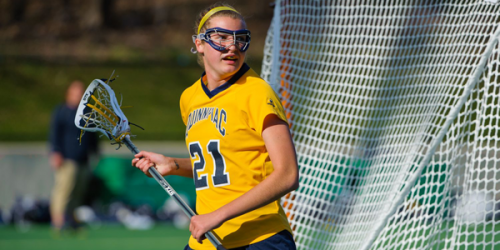 Quinnipiac freshman Kyra Ochwat ranks second on the team with 25 goals and ranks fourth with 31 points. The Bobcats are currently in first place in the Northeast Conference, as they are undefeated in league play.

“I hope that having to watch from the sidelines made Kyra and (freshman goalie) Sam (Tilts) really want to make sure that they were a part of something similar to that once they got here,” Caro said. “Hopefully it made them a little bit more hungry.”

The way Ochwat has played this season, it’s certainly worked.

Ochwat, a freshman attacker, has paced the Bobcats with 25 goals, which ranks second on the team, and has tallied 31 points on the year. On a team when four of the five point leaders are upperclassmen, Ochwat has stood out.

“The upperclassmen on attack, they really help step my game up an extra level by pushing me,” said Ochwat, who has started all 11 games for the Bobcats. “I want to be just as good as them, so I definitely look up to them.”

“It was awesome. It was just an incredible experience,” Ochwat said. “Especially on Long Island, it’s so hard to get out of there, and it’s hard to put words to it. It’s just incredible.”

Ochwat was a fan when she saw the Bobcats beat Mount St. Mary’s 15-3 last April to win their first NEC title.

“It’s an honor to be part of this program, especially coming off of the NEC Championship last year,” Ochwat said. “[Last season’s title game] was incredible. There were wide-open cutters everywhere and so many opportunities on the offensive end and the defense played great and held them to some ridiculous amount. It’s unheard of in women’s lacrosse.”

Caro said she remembers introducing junior Sarah Allen, the nation’s current leader in assists, to Ochwat after the game.

“I said, ‘You better make friends with her because she’s going to get you a lot more assists next year,’” Caro said. “And it’s worked out pretty well for both of you guys.”

Ochwat has won three NEC Rookie of the Week awards this season and leads all freshmen in the league in scoring. She credits the upperclassmen for helping her adjust to the Division I level.

“They help with the pace of the game,” Ochwat said. “With the feeds, especially, that’s a big help. They’re really good at clearing space and just creating lanes.”

But Ochwat isn’t concerned with individual accolades. Caro said one of her best qualities is her humility and willingness to improve.

“She came in as a good player, but she didn’t act like she was one of the best players. She stayed humble,” Caro said. “She kept working hard, she’s been very good at asking for help to figure out the things that she’s not good at … I think her willingness to change her game and adapt to what we need from her has really been the key to our success.”

The team has a two-game lead in first in the conference and has its sights on home-field advantage and a repeat as conference champions. Ochwat is already a high school champion and has seen the Bobcats win once. She said she’d love to win it herself.

“Having everyone come here to host the tournament and do it all over again, I would love to be a part of that,” Ochwat said.