From captain to coach

After growing up and playing in boys’ ice hockey leagues in Wasilla, Alaska, Jordan Elkins moved across the country to Hamden to play Division I women’s ice hockey for Quinnipiac. She is ready to begin a new stage of her life: coaching hockey.

Over winter break, she visited her family in Texas. On the plane back from Texas, she witnessed some young hockey girls sitting next to her. She said she asked them about what team and tournament they were involved in. 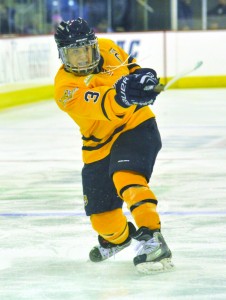 [/media-credit]After talking with one of the parents about visiting colleges while they were playing in the area, she offered to give them a tour of the High Point Solutions Arena at TD Bank Sports Center and even let them watch one of the Bobcats’ practices.

Elkins did not know that the president of the Dallas Stars Elite Hockey Club was in the group. About a week later the team called to express interest in her.

“I had told them I was interested and had family in Texas,” Elkins said. “I wanted to maybe move there. I always wanted to live in Texas but I didn’t know hockey would pull me there.”

Elkins waited until after the season ended to make her decision, especially taking her time since she would be moving halfway across the country for a second time.

“I couldn’t say no,” Elkins said. “I can only hope to help these girls improve from not only day-to-day but have fun while doing it. We all play because we love it and I don’t want that to ever get lost with someone as I have seen it get lost with some of my teammates.”

Over her four-year career, Elkins compiled 36 points with nine goals and 27 assists. But, it is not the stats the matter, but the leadership position that Elkins will be bringing to Texas.

Quinnipiac head coach Rick Seeley believes Elkins has the attitude and demeanor that makes her really stand out.

“Like anyone who meets Jordan, she is very infectious,” Seeley said. “Clearly (she) would seem able for any job like that. It was her being herself, and good things coming of it.”

From a coaching standpoint, Elkins has been very easy to relate to.

“She understands better than most … what coaches are going through from the other side,” Seeley said.

Seeley says that Elkins was not set on what she was going to do or where she wanted to move after graduation.

“I think this is a great way to start a career,” he said. “I’m just thrilled for her.”

One important part of coaching competitive hockey is the differences Elkins will experience after playing college hockey.

“You deal with a lot more parents, and there is obviously a fairness element that doesn’t exist in the college game so it’s a lot different coaching teenage kids than teenagers in college,” Seeley said.

The Dallas Stars Elite Hockey Club gives both male and female players a chance to play a competitive travel schedule with the opportunity to play in front of college scouts.

“Having someone like Jordan there is a step where she can tell them exactly what it’s like to be in college and what they have to do both from a hockey standpoint, academic standpoint, and preparation standpoint. She will be invaluable with that,” Seeley said. “Jordan has a way of attracting attention, and deservedly so.”

Elkins played on Wasilla’s boys’ hockey team all four years of high school and played a little of a different style.

“Through working hard, situations have opened up and Quinnipiac was one of those situations,” said Elkins, who was also an assistant captain for her high school hockey team as a senior.

Elkins will fly down to Texas the first week of June for tryouts. However, she will not move down to Texas until later in the summer. The season starts toward the end of the summer with tournament play beginning.

Being captain at Quinnipiac has helped Elkins see what others can’t.

“It helps you see that every person might need to be motivated a little differently in order for a whole team to come and accomplish a goal,” she said. “I couldn’t say no because it is helping other girls accomplish something, one day someone helped me accomplish.”

For Elkins, she didn’t have a figure to look up to when she was playing competitive hockey growing up in Wasilla.

“If just me being there and being positive about things and I can do anything to help someone say I love this sport and if she can do it I can do it,” Elkins said. “If I can make one girl feel that and hopefully more then it’s worth the time commitment.”

At 14, they start checking in boys’ hockey and in her hometown of Wasilla there weren’t enough girls to play girls’ ice hockey, so Elkins played with the boys until she came to Quinnipiac.

“I had a lot of parents tell me to stop playing hockey in general, that I couldn’t do it that I was going to get hurt,” Elkins said. Even Elkins’s coach notified her parents that she should be playing somewhere else.

“I think bringing that determination showed me that’s what no does,” Elkins said. “If you have a purpose and feel that you can make a difference nothing can stop you. You just have to make a decision and stick to it and believe that what you’re doing does have a purpose.”

Said Seeley: “I’m sure she can take it anywhere she wants to. That’s my feeling about Jordan: she will be successful in anything she wants to do.”