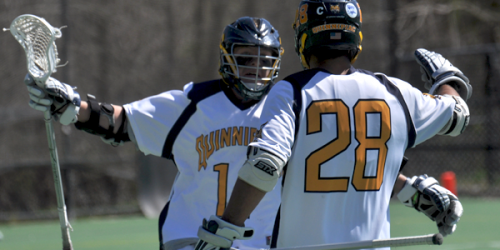 The Quinnipiac men’s lacrosse team isn’t playing like a team that has 23 freshmen on it any more. At least that’s how head coach Eric Fekete sees it. 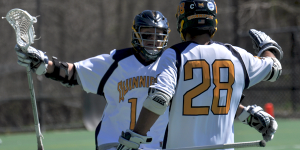 [/media-credit]Quinnipiac (3-6, 2-0 Northeast Conference) lost its first six games to start the season, but has won its past three games by an average margin of five goals.

“We had so many young guys on the field early on and it’s starting to gel a little,” Fekete said. “You see the development in the young guys, and they’re not playing like freshmen anymore, which makes a huge difference because we got so many guys involved in the gameplan.”

Sophomore Dylan Webster scored four goals and won 14 of 17 faceoffs to lead the Bobcats, who are in a three-way tie for first place in the NEC with Robert Morris and Bryant.

“Dylan’s a unique guy because he’s an attack and he’s a point scorer and he’s a finisher, he does that for us a lot,” Fekete said. “He’s a very good face-off guy as well … It’s kind of an unflattering and unnoticed position.”

The Bobcats scored two goals within 10 seconds of each other right before halftime, thanks to Webster. Pat Corcoran ripped a shot from beyond the crease with 11 seconds to play to give the Bobcats an 8-3 lead. Webster won the ensuing face-off. Matt Kycia took the ball and passed it to Webster, who scored a running goal with 2 seconds remaining to give Quinnipiac a 9-3 lead heading into halftime.

“The hardest thing, I think, in lacrosse is when you score a goal and then you get the ball back because it just suffocates the other team,” Fekete said. “When you get those situations, the chances of winning are pretty good.”

The Bobcats scored eight unanswered goals at one point, leading 14-3 midway through the fourth quarter. They held the Seahawks (0-10, 0-2 NEC) scoreless for nearly 30 minutes of play.

“I think we came out strong,” Coppolecchia said. “We set a goal of five goals against before the game and we met that.”

Corcoran, Kycia, Matt Diehl and Kempbell Puckett, all freshmen, each scored for the Bobcats.

Wagner goalie Nicholas Gibaldi made 13 saves on the afternoon while Torey made four. The Bobcats outshot Wagner 44-18.

Wagner’s Colin O’Rourke scored a goal with 5:15 remaining in the second quarter, but it would be the last for a while. Quinnipiac scored three goals before halftime, three in the third quarter and two in the fourth before the Seahawks would get on the board again with 5:33 remaining in the game.

“We had a lot of confidence on our end when the offense put the ball in the net,” said Coppolecchia, a senior defenseman.