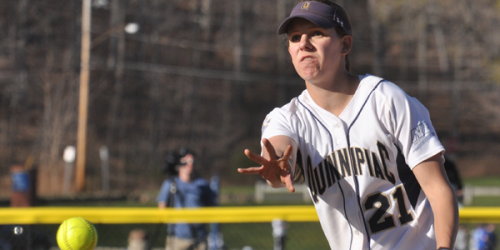 Nikki Barba powered Quinnipiac’s offense Wednesday afternoon with two doubles as the Bobcats defeated Fairfield, 2-0. Jacquie Ristow and Bridget Figmic added RBIs on the day, and each had a hit to their credit.

Katie Alfiere and Heather Schwartzburg each showed dominance on the mound, holding Fairfield to a combined two hits. Alfiere pitched 4.1 innings, striking out one, walking four and also picked up a base hit. Schwartzburg relieved Alfiere in the fifth inning, and struck out six Stags during her 2.2 innings of work, while walking just one batter. 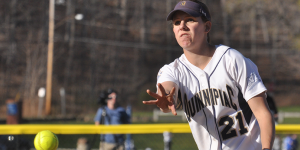 [/media-credit]“All my pitches were working really well, my curve felt good, I was on,” Alfiere said. “I felt confident with my team behind me, they’re always making plays behind my back. I just felt really good out there.”

Quinnipiac (16-9) broke the scoreless tie in the bottom of the second, when Nikki Barba hit a one out double. Bridget Figmic then laced an RBI double to give Quinnipiac the 1-0 advantage. The Bobcats later loaded the bases, after Ashley Heiberger reached on a dropped strike three and Lauren Salgado knocked out a base hit. With two outs, Ristow knocked the ball into the outfield, good for Figmic to score, yet Heiberger was later thrown at the plate.

“As a freshman, she [Barba] is coming through big time. She’s been a starter for us which helps a lot, and she feels completely in the flow,” Quinnipiac head coach Germaine Fairchild said. “She realizes she plays an essential role on the field.”

Fairfield (15-19) came close to getting on the board in the top of the fifth, as two of the first three batters reached base. But that’s when Schwartzburg came in and finished off the Stags with two strikeouts.

The Bobcats take Thursday off before playing a pair of doubleheaders at Long Island University and Central Connecticut Friday and Saturday.

“Today was key getting Katie out, and getting comfortable throwing to batters,” Fairchild said. “We’ve got all three pitchers comfortable right now, which is really what we need going into these four games in two days.”