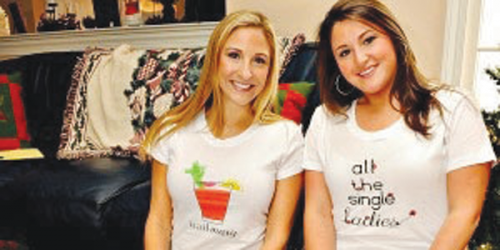 It’s the first day of spring, sophomore year. Your friends are playing kickball and enjoying the sun, while you’re on the sidelines on a conference call with your legal team for your T-shirt company.

That’s the epitome of 22-year-old Danielle Cascerceri’s college career. She started a T-shirt company called bittle-D with her sister, Dorothy Cascerceri, senior editor of In Touch Weekly, during her sophomore year at Quinnipiac. The public relations major and marketing minor did not dream of having her own business, she said, and her entertainment journalist sister wasn’t expecting it either.

What started as a witty comment delivered by Danielle while laying on the couch with Dorothy in December 2009 grew into a business that reaches people in Saudi Arabia, Peru and Australia. 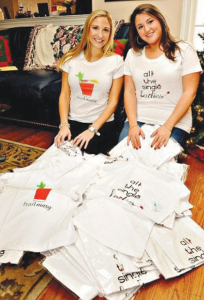 [/media-credit]Dorothy (left) and Danielle Cascerceri with their “hail mary” and “all the single ladies” T-shirts.

That entire day was spent in their family room discussing how to start their own business. A month later, the sisters formed their company legally through the state of Pennsylvania, and two years later they officially launched their website, and were open for business.

With just launching three months ago, the business has worked with Sammi “Sweetheart” from MTV’s “Jersey Shore” and “The Real Housewives of Orange County” stars Tamra and Vicki’s Wines by Wives line.

“I’ve never done anything like this before. The closest I’ve ever come to selling anything was probably girl scout cookies,” Danielle said laughing.

“[This is a] completely new ball game for both of us,” she said. “We’re kind of just taking shots in the dark and we ended up lucking out I guess because the people that we’ve met in the business world and apparel say ‘it’s one thing to have an idea or a ton of ideas but it’s another thing to turn it into something.’”

Having a business as a college student may have come as a surprise for Danielle, but it wasn’t for adjunct professor Jo Amatulli.

“It’s not surprising that Danielle would take initiative to do something like start a business, because even like in the PR class, she would come up with another angle, she’d add a different dimension to an assignment,” Amatulli said.

Amatulli and Danielle started off with a teacher-student relationship, however it grew into a friendship.

“Danielle is just ‘one of those students’—she was a pleasure to have in my JRN 160 and PRR 201 classes,” Amatulli said. “[She’s] very talented, professional, dependable.”

Amatulli was one of many who witnessed Danielle in this new journey. Roommates and friends Lauren Ellis and Megan Brady supported Danielle since the foundation of the business.

“I remember sophomore year, in Mountainview, Danielle would draw sketches of T-shirt graphic ideas before we’d go to bed,” Brady said. “She literally turned her ideas into a reality; a reality that my friends and I can wear. It is inspiring to see strong-willed, young women on their business adventure.”

Ellis and Brady have known Danielle since their freshman year at Quinnipiac, and have noticed her growth but not a difference in her character or will.

“I remember sophomore year when she was throwing out ideas and everyone thought it was such a good idea, but I could not have imagined she would actually fulfill this dream of hers,” Ellis said. “I think what her and her sister are doing is incredible. I don’t know many college students that have started their own business, especially a successful one.”

What’s unique about bittle-D is its choice of using 100 percent organic cotton. U.S. organic certification means growers must produce cotton without synthetic fertilizers or toxic herbicides and pesticides, according to a report in National Geographic.

Organic cotton clothing, unlike processed fabrics, are made without potential allergens and irritants such as dermatitis. Furthermore, dyes, resins and formaldehyde are likely sources of reactions while synthetic fibers and wool can act as irritants, the article said.

Although choosing organic cotton for their T-shirts raised the prices, Danielle said it’s important for their customers’ health and important to her and her sister to be eco-friendly in their business.

Once the business was created the sisters were able bond over similarities but also see different sides of each other.

“Working with [Dorothy] has taught me a lot about her, good and bad,” Danielle said. “But it’s also helped me grow. There are things that I picked up from her that I didn’t have before, that I’m glad I have because eventually, when I’m in the workforce, I’ll need the qualities, the drive, the aggressiveness. We play off each other.”

The sisters come from business backgrounds, as their father was in the bar and restaurant business in Philadelphia and acted as a quiet adviser.

“His success in business is something that inspired us,” Dorothy said. “Even though neither of us have formal business education, we have that business sense running through our veins because it’s who we are and the family that we were born into.”

Danielle is the third of four sisters, and Dorothy is the second. Their parents and sisters played different supportive roles in their business that kept it from crumbling.

“The combination of [our parents’ role] was definitely what got us on our feet and made us do it,” Danielle said. “Without that, it would have been more challenging, because it all started at home and because we’re sisters, you relay a lot on the support of your parents and that fact that we had that from day one was really meaningful.”

Although they are sisters, Dorothy and Danielle are all about the business when necessary. Danielle and Dorothy cover all bases of the business, but they each use their strengths to even out the amount of work to be done, Danielle said. While Dorothy fully focuses on the financials and bookkeeping, Danielle uses her public relations and marketing knowledge to promote the business.

“A lot of the things we talk about in my classes I bring it back to the drawing board for the business,” Danielle said. “I think that’s refreshing especially for my sister because it’s been 10 years since she’s been in a classroom.”

Although this was something created for fun, Danielle and Dorothy take the business very seriously.

With graduation only five weeks away, Danielle has Quinnipiac to thank for the success of her business, she said.

“Quinnipiac has definitely molded the company, in a weird way,” Danielle said. “My home here has prepared me just as much as my home at home, because it’s different. My home at home was the support and the love and the push to do it, but these were the tools that made it happen.”