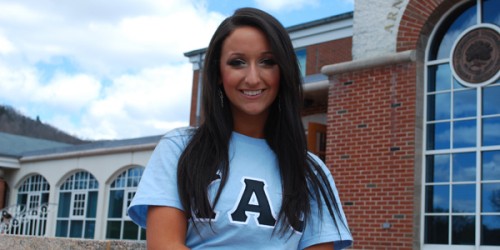 At 12 years old, Kayla Cristoferi watched an old home video with her mother, Kathy. The footage features a 7-year-old with light brown hair, dressed in a sweet, pearly white dress as she gets ready to make her first Holy Communion. Also in the video is Kayla’s older sister, Susan, who acts silly – as little girls often do. But despite Susan’s goofy antics, the young girl in the white dress tries hard to act mature, as she continuously glances over her prayer pamphlet before the ceremony. But the young girl in the white dress is not Kayla – it is her older sister Jennifer, whom Kayla has never met.

Jennifer passed away when she was just 9 years old.

After seeing this home video for the first time, Kayla Cristoferi, now 20, says she remembers thinking to herself, “That’s my sister. She’s alive and well right there.” 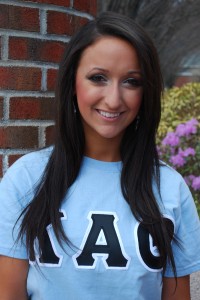 [/media-credit]Jennifer was diagnosed with acute lymphoblastic leukemia (ALL), which occurs when abnormal white blood cells begin to grow in one’s bone marrow, according to the National Marrow Donor Program. The bone marrow eventually becomes depleted of healthy blood cells and then weakens the immune system.

“My mom tells me stories about [Jennifer], and then that makes me feel like I know a little bit about her, a little piece of her,” Cristoferi said as her eyes glossed over with tears. “That’s as close as I can get.”

This past December, Cristoferi accepted a responsibility she hopes will bring her even closer to Jennifer. On April 19 from 10 a.m. to 2 p.m. in the Fitness Center, Cristoferi will spearhead the event, “Be The Match: Kappa Alpha Theta’s Bone Marrow Drive.”

Kappa Alpha Theta, the women’s field hockey team and the Student Programming Board’s traditions and community committee will co-host the event. Cristoferi says participants can add their names to a registry list during the program. In addition, a cheek swab sample will be collected to test for potentially matching bone marrow.

“[The event] is in memory of my sister Jennifer, and to help spread the word to really get people to donate their bone marrow,” Cristoferi said.

About 30 percent of those in need of a bone marrow transplant have a matching donor in their families, and an estimated 1,000 people die each year because they cannot find a matching donor, according to the Institute for Justice.

Chelsea Fritzson, a junior Kappa Alpha Theta sister and nursing major, organized last year’s Be The Match event, which accrued more than 150 signatures. Fritzson, who lost a close friend to the same disease in December 2010, also has a strong personal connection to this event.

“I felt like it was a little bit of destiny,” Fritzson said.

Fritzson says organizing this event will be an important accomplishment for Cristoferi.

“For her to see those people who come out and support her, that’s going to be a life changing moment for her, because it shows the compassion that people have in them, and it’s hard to see that sometimes,” Fritzson said.

At this year’s event, Cristoferi hopes to surpass or at least match last year’s number of signatures.

“If we could save one life, that would be amazing,” Cristoferi said.

According to the National Marrow Donor Program, more than 9.5 million donors currently comprise the Be The Match Registry. Since 1987, the donor program has performed an estimated 5,500 bone marrow transplants every year.

“It’s not as easy as giving blood, but at the same time these people that are in need of it,” Cristoferi said. “[Donations] are completely worth it when you think about it.”

When Kayla’s mother learned of her daughter’s involvement in the bone marrow drive, she said she was “overwhelmed” by the news.

“It’s so meaningful to me as a mother, to know that she is doing something to help other people,” Kathy Cristoferi said. “Possibly, maybe someone might be a match and it could save somebody like my daughter.”

Once Cristoferi officially accepted the responsibility to oversee the bone marrow drive, she decided to share the story of her biological sister with her 181 sorority sisters.

Last month, Cristoferi anxiously stood up in Burt Kahn Court during a weekly sorority chapter meeting. With shaken nerves and watering eyes, she admitted her motivation for organizing this drive is in memory of her older sister.

“It was very overwhelming, but it felt so good after to have all of them hug me and be like, ‘whatever you need we’ll help you, support you,’” Cristoferi said.

When Cristoferi addressed her sisters in chapter, Fritzson said she knew exactly what her fellow Theta sister planned to say.

“I immediately started crying,” Fritzson said. “It was a very touching moment.”

“It’s strange to know that you don’t know your own sister. I felt like there was something missing for so long,” Cristoferi said. “When I joined Theta, it just filled that missing void that I’ve had for a while.”

While Cristoferi’s sorority sisters never fail to inspire her, she says it is her mother who inspires her the most. Cristoferi says both Jennifer and her mother, who works as a radiology technologist, influenced her decision to pursue a career in nursing.

“She just has a heart of gold,” Kathy Cristoferi said. “I think she was made to be a nurse, she loves helping other people.”

Due to a mono diagnosis last semester, Cristoferi has not yet been able to donate bone marrow. However, she plans to sign up during this drive. Regardless of how many signatures she raises on April 19, Cristoferi hopes to give back – for Jennifer.

“We keep her in our thoughts all the time. I think of [Jennifer] every day,” Cristoferi said. “Thinking of [Jennifer] will always make me realize that you have to give all you’ve got to help someone out there.”