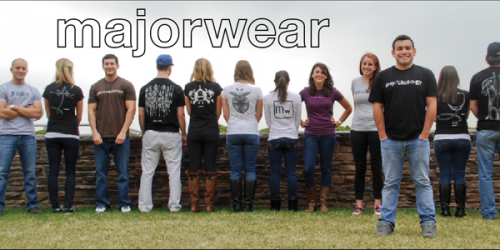 Friends of Michael Ricciardi (pictured in the foreground) model his line of T-shirts for MajorWear, which he created with his uncle Joe DiMaggio Jr.

Whoever said you aren’t what you wear has never met senior Michael Ricciardi. As cofounder of the wholesale clothing line MajorWear, the 21-year-old psychology major has combined a newly discovered passion for business with his unwavering Quinnipiac spirit to create an innovative way for college students to mix their everyday expression of fashion with who they want to be for the rest of their lives.

“Everyone has their college sweatshirt, their college T-shirt. But, this is a way to separate that from what your passion is,” Ricciardi said. “Quinnipiac, or wherever you go, is like your community and your major is like your house in the community. It holds you together and binds you to people that share that house with you.”

The necessity to transform the college apparel industry came to fruition for Ricciardi rather quickly, who collaborated on this project with his uncle, Joe DiMaggio Jr., in August 2011. Together, DiMaggio and Ricciardi expanded on the concept of academic pride for college apparel, which seemed to be lacking in the college market. Ricciardi was recruited by his uncle for partnership as the creative inside source to the contemporary climate of college life.

“I’m currently in college right now and he knows that I have a strong motivation for the college culture,” Ricciardi said. “I’ve struggled with bad anxiety for my entire life, and I wasn’t sure if I’d be able to go away to college. I couldn’t believe that I came to Quinnipiac, and now I don’t want to leave at all.”

However, pursuing business was never a part of Ricciardi’s initial plan when he first came to college.

“I had the whole plan in my head that I was going to be a clinical psychologist from the time that I was 5 years old until literally five months ago,” he said. “But, business was always a motivation for me. Psychology is more of a hobby to me. I like it, I enjoy it, I’m good at it — but this is where I want to be. I want to change the world.”

Guided by the MajorWear team and Ricciardi’s ambitious mindset, MajorWear has made large strides in a short amount of time towards changing not only the college industry, but the way students choose to represent their intellectual pursuits. By fall 2012, MajorWear is scheduled to have contracts with more than 700 colleges and universities across the United States and Canada. Moreover, the look behind MajorWear is sure to give college clothing a fresher appeal that many students will be eager to wear around their respective campuses.

As of now, MajorWear has four lines of all-American made cotton T-shirts. The “Illustrated” line is the most novel and artistic, consisting of a black and white template with the majors spelled out in dictionary typography on the front. On the back, each shirt has a specially designed logo in the stipple art form that is unique to the major being represented.

“Our artists collaborated with actual students to find the best 101 hook that the major could offer. So for example, our psychology shirts have a Rorschach inkblot and our nursing shirts have this really cool, huge stethoscope,” Ricciardi explained.

MajorWear’s additional three lines — the clean and simple “Diploma” line; the school color-specific “Moniker” line; and the “Doodle” line (which encourages students to send their major-inspired doodles to the company to be featured on the shirts themselves) — are just as fashionable, and reinforce MajorWear’s encouragement to “Declare Yourself.” It is clear that these distinct lines are what separate this fashion line from the average college clothing standard.

“MajorWear is a very customizable company unlike most college apparel companies. We craft the majors to the university’s choosing,” Ricciardi said. “We’ve been getting requests for underwater welding and various types of engineering; we’ve been getting asked to formulate designs for very abstract and obscure majors and our artists are having an absolute ball.”

The brand’s trendier attitude towards college clothing explains the success MajorWear experienced in early March at the College Stores Campus Market Expo in Salt Lake City. Although MajorWear is still in its infancy, its popularity is growing at a rapid rate and making a name for itself among established collegiate brands such as Nike, Adidas and Under Armour. But, it is also MajorWear’s message that is giving the clothing line a name that is projected to revolutionize the way college students think about their academic careers.

“This is a way for college students to come together all over the country,” he said. “MajorWear is what we call a tangible social network. Facebook, Twitter, they’re all awesome things that bring people together, but MajorWear is a materialistic item to hold that social media can’t give you while you express yourself.”

While MajorWear encourages students to embrace their individual passions and share them with other students, it is also declaring itself as a brand with a limitless future. Ricciardi explained that the company has plans to expand itself to include dorm gear, such as comforters and sheets. A co-brand called MinorWear is also in the works, for the “When I grow up, I want to be…” sensations that are so familiar to a child’s social upbringing.

The staggering pace in which MajorWear has developed reflects how having a powerful passion in something can nurture success. Michael Ricciardi’s own individual enthusiasm for both business and the college lifestyle has fostered the type of success that college students hope hard work will bring them, and that’s exactly what MajorWear’s goal is. It’s what Ricciardi has recognized in himself and in the brand that he has thrown all of his energy into.

But at the end of the day, Ricciardi says MajorWear is just simply practical.

“You need clothes and you have a major,” Ricciardi said. “Combine it. It’s fun and very comfortable.”