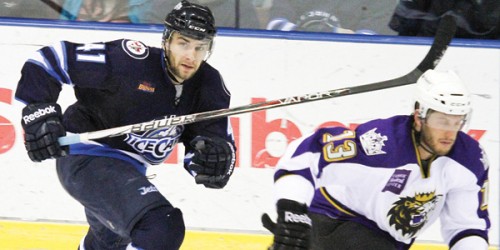 Former Quinnipiac forward Scott Zurevinski skates with his new team in the American Hockey League, the St. John’s Ice Caps on March 17. Zurevinski has played six games so far with the Ice Caps and has five shots on goal and 11 penalty minutes.

March 17 was anything but normal for Scott Zurevinski. It started with a flight from Hartford to St. John’s, Newfoundland. It ended with Zurevinski playing in his first professional game for the St. John’s Ice Caps of the American Hockey League.

“I went to the rink and by the time I was done with my physicals and learning all the systems, it was about five minutes until warm-ups,” Zurevinski said. “I basically jumped right in. My first shift I didn’t have much time to think about it. They just threw me out there.”

Playing Zurevinski that night was not the plan when he took off, Ice Caps head coach Keith McCambridge said. During the approximately two-and-a-half hour flight, everything changed.

[/media-credit]Former Quinnipiac forward Scott Zurevinski skates with his new team in the American Hockey League, the St. John’s Ice Caps on March 17. Zurevinski has played six games so far with the Ice Caps and has five shots on goal and 11 penalty minutes.

“From the time he took off to the time he landed, we had two injuries and a call up to the (NHL),” McCambridge said.

Going essentially from the plane to the ice wasn’t easy, but Zurevinski made the most of it. He finished that game at a minus one with seven penalty minutes.

“He came out, he was physical, had a big hit, had a fight, protected the puck well,” McCambridge said. “He did some really good things his first game.”

And he made sure to make his first professional game memorable. Just under four minutes into the second period Zurevinski was in his first fight in four years, squaring off with proven AHL tough guy Richard Clune.

“I finished one of my checks in the other team’s end and he obviously is out there to protect his teammates and didn’t like the way I hit the guy and challenged me,” Zurevinski said. “With me being a rookie and my first game, I had to answer the bell. I was happy to do so. I had a good time. I thought it was fun.”

For a kid who dreamed of playing professional hockey, it was an unbelievable turn of events.

“It felt more surreal than anything,” Zurevinski said. “I wasn’t expecting to play the whole weekend. I thought I’d be there and watch a few games. Next thing you know I was landing and a hour and a half later I was jumping right in the game.”

While Zurevinski made his professional debut that night, it is not the first time he was offered a professional contract.

Following his sophomore season, Zurevinski was offered a two-year contract from the Vancouver Canucks. He turned down that offer to return to school for two years.

But this year Zurevinski, a senior, took the opportunity to turn pro when the Bobcats season ended with a quarterfinal loss to Colgate.

“I was itching to go try the pro level and get my feet wet that way,” Zurevinski said. “The Ice Caps, or Winnipeg, showed some interest. I decided to jump on it and head out here.”

Zurevinski said there are two ways to go about getting a pro contract once a college career is over.

“You can either wait it out and hope for a two-year deal or an NHL two-way, or you can take (an amateur tryout contract) and go there and try and get some pro games and then sign a two-way deal in the summer,” he said.

And now that he is playing in the pros, there is some adjusting to do. There are some things in professional hockey that are different from college hockey.

“The biggest thing is just earning your ice time,” Zurevinski said. “Obviously, here in St. John’s they’re one of the best teams in the American league so it’s tougher now to get ice. I have to earn everything I get.”

Along with adjusting to life in the pros, Zurevinski continues to take classes at Quinnipiac and is planning on graduating in May.

Zurevinski said continuing his education and working toward a degree is one of the reasons he didn’t take the Canucks’ offer two years ago.

“I wanted to get my education,” he said. “I think it’s very important especially with the physicality in the game of hockey. Obviously, I want to be a pro hockey player but you have to have a backup plan.”

No matter what happens in the last seven AHL regular season games, there are no guarantees for the future. The amateur tryout contract he signed is done at the end of the season and what comes after is unknown.

“At this point it’s completely of up in the air,” Zurevinski said. “It’s why I’m out here, just to get games.”

“Just getting exposure is going to be huge for me and getting games under belt is going to help me and hopefully I can earn myself a new deal in the summer.”