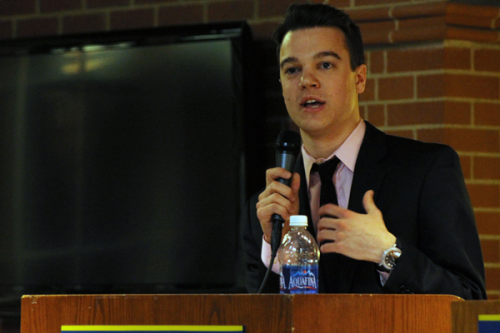 Ryan Scanlon speaks to students who came to the Student Government Association debate for its annual elections.

Catherine Boudreau
The feeling of camaraderie between Heidi Hitchen and Ryan Scanlon, candidates for Vice President of Public Relations of SGA, made for more of a discussion than a debate Monday night. Though the candidates consistently supported one another, they were grounded in different platforms.

Both stressed the importance of making bonds between the students, SGA, the administration and the community of Hamden. However, each had a different idea on the most effective way to accomplish this.

Scanlon emphasized utilizing social media, writing press releases and doing more community service while Hitchen discussed a more traditional approach by directly speaking to the public and forming relationships with them. Each also wants to promote the use of “Do U QU,” a website bringing all the student organizations together. This is also where voting will take place.

The candidates stated their main initiatives. Hitchen said she wants to continue to grow the “Live the Legend” campaign, which stemmed from the launch of “Repect Your Ride” last semester. She also wants to focus on improving school pride and increasing attendance at campus events.

Scanlon said he plans to promote interactive events so students feel more connected to SGA, as well as the importance of unifying all three campuses. That would include placing a drop box for student concerns on the North Haven campus.

The class of 2013 representatives ended with a hug, reinforcing the overall feeling of their presentations: Each candidate believed one another was equally qualified for the position.

Hitchen: “I felt as though the debates went really well. I was very confident and excited to share my platform and my thoughts with the community. I only wished there was a greater turnout. Hopefully if I’m elected I could PR this a little bit more next year and get more people out. But I heard there was a lot of people watching online which is amazing as well.”
Delete Image
Align Left
Align Center
Align Right
Align Left
Align Center
Delete Heading