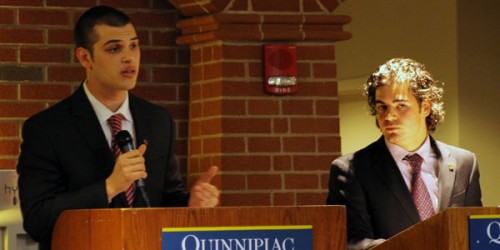 Theo Siggelakis (left) debates Evan Milas in front of students who came to the Student Government Association debate for its annual elections.

Evan Milas and Theo Siggelakis, both vying for the vice president of student concerns position on the Student Government Association, engaged in a contentious debate on Monday night in the Mount Carmel Café.

In their respective opening statements, Evan Milas talked about his passion for SGA and his approachable personality, while Siggelakis highlighted his personal drive and strong motivation.

Siggelakis continued to discuss how communication with students is key while Milas emphasized how school spirit on the Quinnipiac campus needs improvement. To this point, Siggelakis said that “utilitarian needs” must be met before school spirit can be addressed.

Siggelakis was aggressive in his debate style, often asking for the opportunity to rebut his opponent’s points.

When asked about his qualifications for the position, Siggelakis cited his outgoing personality and motivation to succeed.

“When other people rely on me, I make sure their needs are met first,” he said.

Milas spoke about his approachable personality, his teamwork skills, and his ability to lead a group to accomplish goals in response to the same question.

After the debate, Milas said, “I felt nervous, and I think that came across, but I also think I expressed my interests well.”

He said that he has spoken to many students over the past few weeks who have responded enthusiastically to his campaign and his goals. “I think I have gotten my platform out there on campus well,” he said.

“I thought the debate went really well. I thought my competitor presented a great argument as well,” Siggelakis said. “I feel confident going into tomorrow, and I think that I have done all that I possibly can to try to win this election.”

“I am not that worried about the debate affecting the outcome of the election,” Milas said, “and I am excited to see what happens tomorrow.”