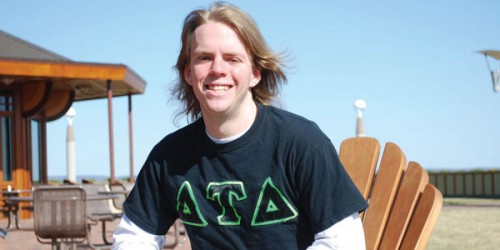 A.J. Billingsley is back at Quinnipiac after taking a medical leave for alcohol abuse and depression.

Write down a list of the three most important things in your life on a sheet of paper. You might have your family, friends and graduating college.

Now imagine losing all three of those things.

This concept was the theme of an activity that A.J. Billingsley led at a chapter meeting for Delta Tau Delta. When he did this activity himself, it wasn’t a practice, and it wasn’t in a room of 60 of his fellow brothers. It was in an alcohol rehabilitation center with an even larger group of people seeking help.

“I lost everything,” said Billingsley, now a 21-year-old junior.

He has three of these notes as reminders and keeps them in different places: his golf bag, his car and his desk — all to remind him of what he once lost because of alcohol abuse.

At one point or another, he lost all three. He says he felt isolated from his family, fell into the wrong group of friends and eventually left school.

To this day, he said leaving school was one of the best life choices he has made. If he didn’t, “I’d probably be dead,” Billingsley said. “As weird as it is, I can’t see a good result coming from it.”

Billingsley started drinking when he was 16, the age when he stopped playing competitive sports. It was that same year, when he was a high school sophomore, that one of his friends committed suicide. He found himself without an outlet to release all of his emotions like he had when he used to play hockey.

“When you’re 16 years old, you can’t really handle it. I did as best as I could,” Billingsley said. “I think about it every day, especially around now.”

He turned to alcohol to mask everything — from the depression stemming from his friend’s death to the anxiety he felt. He didn’t drink often in high school, maybe two or three times each month he said. But in those times, he would blackout.

“I didn’t really know what I was doing. It was just my thing,” he said. “I come to find out now that it was alcoholic behavior.”

A friend of his from home, J.P. Lalumia, said he noticed Billingsley hanging out with different crowds and doing different things. He noticed that Billingsley was changing, and was the first person to actually call Billingsley an alcoholic in December 2009.

“I just had to tell him,” said Lalumia, a sophomore. “It was really tough on me because I didn’t want to say anything. I didn’t want to make him mad because I knew saying this could potentially end our friendship, but I said it to him because I care about him.”

Billingsley was defensive about it, saying Lalumia didn’t understand, especially because he is a year younger.

“I was like, ‘I’m not an alcoholic. I drink two to three times a month, tops,’” Billingsley said. “They saw it and I didn’t. It’s the intent behind it. I was looking for the releaser and I couldn’t find that with what I had.”

His drinking did not get out of control until he started college. During his first semester, his drinking started on Thursdays and would continue on Friday and Saturday nights too. But as the weeks went by, the weekends started on Wednesday. Soon enough, they started on Tuesday.

“By the beginning of second semester I was drinking six days per week,” Billingsley said.

Some college students start pre-gaming at around 7 or 8 p.m., but Billingsley kept pushing the standard to around 4 or 5 p.m. He says he felt more and more apathetic as a result of drinking, especially in the classroom. 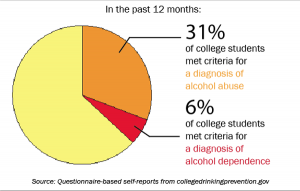 While he was a straight ‘A’ student growing up, he found himself putting in minimal effort. In his second semester, he didn’t show up to two of his classes at all.

“I’d get to the bare minimum and then call it a day. It showed,” he said. “I went to 15 minutes of my math class and that was it. I went to maybe a third of my history classes and maybe a quarter of my English classes, and I just didn’t want to do it. I didn’t want to get out of bed. The depression and the anxiety at that point was really starting to take hold.”

At one point, instead of taking 15 credits, he was down to six, and he failed three of them. He once slept through a midterm and was called out by a teacher for drinking in one of his classes on St. Patrick’s Day.

“I got an email later and found out that he was going to fail me in class for the semester and I felt like an absolute failure,” Billingsley said. “I had six credits and I failed three of them, and what the hell am I supposed to do? … That’s when the drinking kind of kicked in. I was like, ‘You know what? Don’t worry about it right now, you’ll handle it tomorrow.’ It didn’t end up happening. It was non-stop.”

“The drinking got to a point where I couldn’t control it,” he added. “The depression was at a point when I didn’t get out of bed.”

Then came March 21, 2010. The weather was sunny and he was sitting outside on the soccer field bleachers, looking up at the sun and just thinking to himself: why?

“I was just looking. There was a lot of blank and I didn’t know what to do with myself,” he said. “I can’t stay here and survive … That was the first time I made a decision that was best for me at Quinnipiac.”

The next morning, he called his dad for what he said was “by far the most terrifying phone call I’ve ever made in my entire life.” He went to health services and then saw Carol Boucher, associate vice president of student services. Within 15 minutes, he was on a medical leave of absence.

“By choosing to go home I knew that it was the only way I would be able to walk at graduation anywhere,” Billingsley said. “I just wanted to find something to fix it with, and I couldn’t find it here. That’s what the big decision was and what the trigger was.”

Later in the week, Billingsley went to Gosnold, a rehabilitation clinic in Cape Cod for about 10 days before he left and went to HaML Clinical Associates in Needham, Mass. That’s where he met Dr. Harry MacGregor Leichtman, the man who gave Billingsley the ability to think about life and give him structure. He still talks with Leichtman on a regular basis.

“That was the real changing point from where I was at school to where I am now,” Billingsley said. “It was meeting with him and slowly but surely, not drinking, staying sober, and getting in touch with my parents, I was realizing that I was extremely lucky that I have the motivation I keep to this day.”

He spoke with Boucher later that summer and returned to Quinnipiac in fall 2010 and has since put his life on track. He holds an e-board position for his fraternity and still is on track to get a graduate degree and be involved in investment banking, which is what he wanted to do before he got involved in drugs.

He said he one day hopes to open up a youth rehabilitation center because it’s something he is passionate about. He has also spoken with Boucher about speaking about his past to classes. It’s not something he shies away from; rather, he has called himself an alcoholic and does not cower away from the phrase.

“I’m not scared to say it,” he said. “It’s one of those things that’s really tough to get there and admit. It’s tough. It doesn’t go away.”

He said as long as he makes a difference to one person, it’s worth it.

“I’m still learning, I’m still making mistakes,” Billingsley said. “I think after getting back to school sophomore year, I’ve put more of an emphasis on making myself happy and making myself my first priority.”