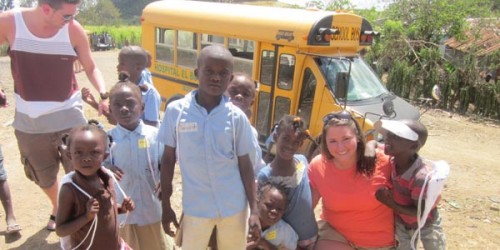 With the frustration of winter and the semester dragging on and summer soon in sight, many students were eager to take a break from reality and enjoy their spring break. On the other hand, seniors Danielle Cascerceri, Megan Brady, Katie Warner and Kevin Mahoney, took advantage of what was beyond the walls of their resort in Punta Cana, Dominican Republic.

On March 13, the students met Quinnipiac public relations professor John Powers in the Dominican Republic city of La Romana to spend a day seeing how life truly is for others outside of what we know.

For the past 22 years, Powers has led students to La Romana, each time going back to help in a different way, whether it be helping build hospitals and schools or bringing over donated clothes. 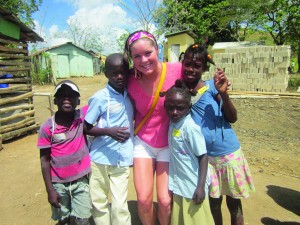 [/media-credit]Powers teaches a public relations campaign class at Quinnipiac in which he educated students in developing comprehensive PR campaigns for the two non-profits located in La Romana. The two charities, The Good Samaritan Hospital and the Joe Hartman school, serve the poor through the help of solid PR campaigns that Powers believes can raise awareness and gain support from the American audiences.

When the four students mentioned to Powers that they would be going to Punta Cana, DR for their spring break, he informed them they could visit the hospital, school and the Haitian sugar cane village, known as a “batey.”

“They were able to meet and interact with the teachers and students of the school, visit the hospital and talk with patients, clinicians, and administrators, and interact with the kids in the batey,” Powers said. “Seeing and experiencing this personally will certainly greatly enhance the work on their PR campaigns.”

After two hours hours of traveling, the students arrived at their destination. Admitting she was nervous, Cascerceri explained the roads of the batey were poorly paved and ahead of her were fields of trash and tin boards, which served as walls and roofs to the houses of the town.

“Driving through the country on the bus was eye opening; it was so beautiful and so poor at the same time,” Brady said.

Cascerceri and Brady were greeted with hugs and hand holding from the children of the batey. Although La Romana is a Spanish-speaking batey, the language differences proved to be no barrier.

A little girl took Cascerceri by the hand, leading her towards the tin-roofed houses, and letting curiosity get the best of her, she went inside. Horrified by the conditions of the “house,” Cascerceri was greeted by filth, walls visibly falling apart and a cat and live chicken running around in what appeared to be the little girl’s kitchen.

After leaving Batey 106, the students passed another batey, which appeared to be in even worse condition than the first. But, to the students’ surprise, the churches were in most pristine condition and beautiful, Cascerceri said.

“It blew my mind how the people live in houses that are literally holding on by a thread yet the churches are built with skill and the best materials,” Cascerceri said. “That was one thing that really struck me and impressed me about the Dominican people–their loyalty to God even though they struggle in most aspects.”

Next, the group visited a school which had four classrooms, one for each grade from preschool to second.

“One thing that really stuck out to me was how they are trying to build the school while kids were in attendance,” Cascerceri said. “Something like this would never happen in America because it would be considered too dangerous. There were literally pieces of wood and nails and screws lying around where the kids go to school.”

After driving through a more urban area of the Dominican Republic, the group arrived at a hospital built completely from donations and volunteer work. The group took a tour of the hospital, which included a physical therapy room, a dentist’s office, a mammogram area and operating rooms.

“In graduate school for the Physician Assistant career at Quinnipiac University, traveling internationally for one of the clinical rotations is a possibility. After seeing the excessive need and visiting a hospital, it is definitely something worth considering,” Brady said. “It is a great opportunity to learn a ton, as they need all the hands they can get, and make a major positive impact on the lives in La Romana earlier.”

Due to unclean water, the number one killer of children in the Dominican Republic is dehydration caused by diarrhea. The DR Mission Team, which Powers runs, organizes a water filtration system donation drive. The system implements a freshwater system in each batey so the drinking water can be clean and safe.

At the end of the day, the students walked away with the knowledge of what life is like, not even a world away, but maybe even outside of the gates of the resort they stayed, and the difference donations and volunteer work really can make.