What is white, shiny, has arm rests, air conditioning and can be seen cruising between Mount Carmel and York Hill?

That would be the new shuttles transporting students from campus to campus.

There are a total of six new shuttles, four big and two small, which have replaced the old shuttles that had outlived their life spans of four to six years, Chief of Security & Safety David Barger said.

“There is a great deal of more mileage on these shuttles because they will just be going on a continuous route between the two campuses,” Barger said. “These shuttles are nicer, the seats are better appointed, more fuel efficient, which not only benefits us but Dattco as well, especially with the average price of fuel in Connecticut.” 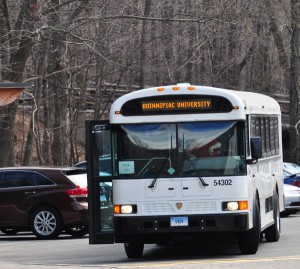 [/media-credit]The new shuttles will not be going to New Haven from Thursday through Saturday at night. They are strictly for transporting students from Mount Carmel to York Hill and back, Barger said.

Through the annual contract that Quinnipiac has with Dattco, new shuttles are possible when they become older and replacements are necessary, Barger said.

Although the new shuttles do have spacious room for long-legged students, seat belts, arm and foot rests and air conditioning, they consist of 36 seats, which is 18 seats less than the old shuttles.

Students are impressed with the updated shuttles, but do not find them necessary.

“The new shuttles are nice, but I didn’t think the old ones needed changing,” junior Brien Slate said. “We need bigger shuttles and less small ones.”

Another addition featured on the new shuttles is a digital rectangle board that has “Quinnipiac University” in yellow lettering flashing in and out.

“I like that they have air conditioning, but I think they should utilize the digital banner on the outside of the shuttles to say York Hill or wherever their destination is instead of just Quinnipiac University,” junior Courtney LaRue said.

There are still about five old shuttles that remain on campus for going to New Haven, Hamden, Whitney Village and the Westwoods lot.

The rest of the shuttles will be replaced within the next year. Additionally, an athletic charter bus has also been added.

“We just want our students to have nice buses, and so when these buses get older and if we can get the contract, we want to get clean new buses and have something that the students can take pride in, we will,” Assistant Chief of Security Edgar Rodriguez said.