“In all my four years here I’ve matured as a player and an individual,” Clarke said. “I think that’s one of the biggest things is learning how to mature.” 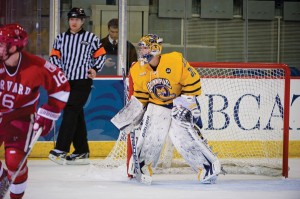 [/media-credit]During his sophomore year, he went 7-0-0 in November, making him the first ECAC Hockey goalie to earn Hockey Commissioner’s Association (HCA) Player of the Month honors.

Clarke finished his collegiate career with a 32-32-5 record with a 2.62 GAA average and .902 save percentage. His 32 wins as well as his GAA rank third in Quinnipiac’s Division 1 history. Clarke also had five shutouts as a Bobcat which is also third all-time.

“Dan Clarke had an excellent career at Quinnipiac University,” Quinnipiac head coach Rand Pecknold said. “We are proud to acknowledge him signing his first professional contract with the Bridgeport Sound Tigers of the AHL and wish him all the best as he moves forward in life.”

Clarke signed with Bridgeport due to one of the Sound Tigers’ goalies going down with an injury.

“I got a phone call from a local agent friend,” Clarke said. “Their goalie went down and had an injury so I was available. The right things fell in place at the right time.”

Before arriving at Quinnipiac, Clarke played for the Bowmanville (Ont.) Eagles of the Ontario Provincial Junior Hockey League. He played eight games with the team, going 5-2-1 with a 2.08 goals-against average and a .938 save percentage. Clarke won Playoff Most Valuable Player honors with Bowmanville during the 2007-08 season.

“It’s a new experience, the pro life is a lot different from the college game,” Clarke said. “You got a lot more freedom and it’s a job now. You’re on your own and you got to show up to work everyday.”

Clarke’s signing with the Sound Tigers comes two days after senior captain Scott Zurevinski signed with the AHL’s St. John’s IceCaps. Zurevinski and Clarke currently represent two of the 10 former Quinnipiac players who play professionally for the AHL and ECHL this season.

Some of Clarke’s teammates from his previous four years at Quinnipiac and several coaches have contacted him to wish him luck.

“Everyone’s been pretty supportive of my decision,” Clarke said. “They just want the best from me, and it’s been really fun.”