Music blasted from speakers in Burt Kahn Court as a group of ballroom dancers showed an energetic crowd what they had learned over the past few weeks. As each performance came to a close, the crowd erupted into a thundering applause. This March 23 performance was not a typical Friday night event at Quinnipiac.

The Quinnipiac Ballroom Society held its inaugural Dancing with the QU Stars event. With more than 400 people in attendance and $2,000 raised for Camp Sunshine, a week-long retreat that gives terminally ill children and their families time to relax, the night was dedicated to giving back to those in need. 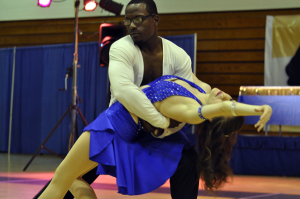 There were eight teams, each consisting of a QBS member and a “QU star,” either an administrator or professor. Over the course of the evening, the teams each performed two different dances such as the foxtrot or rumba, and battled it out to take home the first place trophy.

The crowd’s energy is what made the event so unique. Nearly every aspect of the Quinnipiac community was represented — professors cheering on their co-workers, students rooting for their friends and onlookers who were there to see what all of the excitement was about.

“Not many events attract such a diverse group of people; the sense of community shown tonight was great,” said Cindy Long Porter, an event participant and associate dean of student affairs and director of residential life.

In the end, everybody was a winner. There was a tie for first place: between Professor Porter with her partner Ethan Pandolfi, and professor Stanley Rothman with his partner Danielle Martin. Afterward, awards such as “Most Enthusiastic” and “Best Showmanship” were awarded.

“Everyone is so good, and the amount of talent that was out on the dance floor tonight was incredible, making it an awesome surprise for me to win this,” Pandolfi said.

Rothman echoed Pandolfi and said that tying for first place felt great and that there was an immense amount of talent shown by the students and stars.

It was evident that all the members put a lot of work into making the night as special as possible.

John Midy, president of the Quinnipiac Ballroom Society, said he was really proud of everybody’s tremendous amount of effort and hopes that the popularity of the organization will grow after a night like this.

Chances are, Midy is right. What QBS put together on Friday night was nothing short of a job well done.