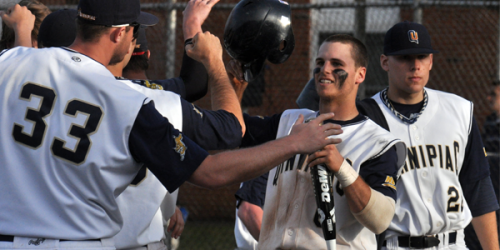 It was only a matter of time for Quinnipiac’s offense to explode.

The Quinnipiac baseball team had averaged just fewer than two runs per game entering Friday, but the Bobcats scored 15 runs on Friday, as they split a doubleheader with the Fairleigh Dickinson Knights at Quinnipiac Baseball Field. The Bobcats lost the first game, 8-4, but won game 2, 11-4. 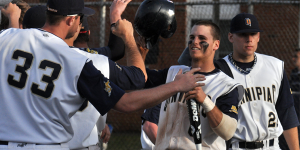 Gabe Guerino went 3 for 3 in game 2 with five RBIs and a home run. Zak Palmer recorded four hits in game 1 and Vin Guglietti went 4 for 8 on the day for the Bobcats (3-13, 2-4 Northeast Conference).

“We bounced back after the first game.” Guerino said.

Spencer Kane pitched a complete game in game 2, while Derek Lamacchia allowed five runs (three earned) in six innings of work in the first game for the Bobcats, who play another doubleheader tomorrow.

“You have back-to-back doubleheaders, and that’s as tough as you’re gonna get in professional baseball and college baseball is the same exact thing,” Quinnipiac head coach Dan Gooley said.

Kane (2-2) struck out two and allowed eight hits in seven innings of work. After he allowed three runs in the third inning, he allowed only two hits for the rest of the game.

“I think I started out all right, it took me a little while to settle down,” Kane said. “I got a good hold of my curveball because it wasn’t working early, so once my off-speed started working better, I was able to keep them off balance and then I was fine.”

Guerino broke the game open in the fourth inning with a two-out, three-run home run to right-center to give the Bobcats a 9-4 lead.

“That was huge because we were only up like two runs, so that was kind of a margin that was scary to pitch with,” Kane said. “Once he hit that home run, I was like, ‘There’s no way I’m giving up five runs.’”

Lamacchia leads the team with 29 strikeouts and still posts a sub-2.00 ERA, but allowed nine hits and hit one batter.

“He’s been outstanding all year,” Gooley said. “His command was a little soft a couple of times today … We knew [the Knights] were a good offensive team and Lamacchia got a little too middle-middle, but he’s a hard-nosed, competitive kid.”

Quinnipiac left two runners on base in the sixth, seventh and ninth innings.

Quinnipiac had two runners on with one out in the sixth, but Kyle Nisson grounded out and Guerino flew out to end the inning. The Bobcats pulled to within three runs in the seventh inning, but Nisson flew out to right. A fly out and a force out ended a chance of a comeback in game 1.

Ray Buckley, Matt DeRosa and Kevin Adler combined to allow three runs in relief in game 1. Kane saved the bullpen from working in the second game, needing 96 pitches for his second complete game of the season.

“We did a good job, we saved our bullpen in the second game,” Gooley said.

The Bobcats scored four runs in the first inning on RBI singles by Nisson, Palmer and Guerino, and a wild pitch.

Jesse Ullrich, Scott Donaghue and Nisson all walked in the fourth inning. Chris Caldari hit a sacrifice fly before Guerino hit the team’s first home run of the season.

Neil Mammele went 2 for 4 and had an RBI triple in the third inning to give the Bobcats a 5-4 lead.

Eric Anderson went 4 for 7 on the day and pitched three innings of game 2 for the Knights. Riley Moonan had three hits and Shane Siebler recorded four hits.