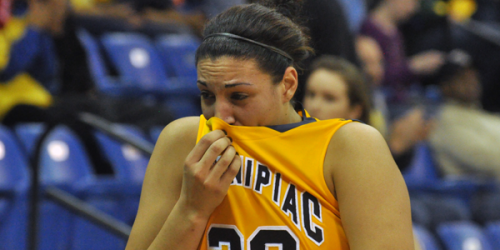 With 27.8 seconds left on the clock in the Northeast Conference semifinal, No. 2 Quinnipiac came out of its timeout with possession and was trailing No. 3 Monmouth, 68-66. A 14-point halftime deficit had been erased and the Bobcats season came down to one last shot. Freshman Jasmine Martin had the ball in the post and backed down her opponent as the clock ticked down to single digits. 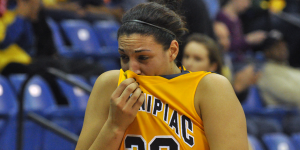 Martin then saw the team’s scoring leader, Felicia Barron, cut to the 3-point line and hit her with a pass. Barron fired with about 4 seconds left on the clock. The shot looked to be angled perfectly, but fell inches short as it deflected off the front rim. Chevannah Paalvast of Monmouth grabbed the rebound and was fouled with 2.7 seconds left.

Paalvast hit 1 of 2 foul shots and the Bobcats called a timeout off the miss. Barron received the ball off the inbounds pass and heaved up a half-court prayer that fell short. Quinnipiac was knocked out of the playoffs and had its season ended following the 69-66 loss, while Monmouth will play Sacred Heart in the NEC Championship Game on Sunday.

“We climbed the mountain the whole second half to come back and get up four with five and change to play,” Quinnipiac head coach Tricia Fabbri said. “What a great second half, but I’m scratching my head at what happened to us in the first 20 minutes.”

The hole the Bobcats dug in the first half proved to drain the team of its energy and essentially ended their season.

“They came right out and put us on our heels,” Fabbri said. “Give them a ton of credit they were ready to go, ready to play. (We) Couldn’t stop them, inconsistent with our defensive possessions, then turning the ball over on our offensive side.”

Barron, who leads the nation in steals, had no steals late in the first half to go along with her lack of offense. After she was called for her second personal foul, Barron picked up a technical foul when she showed her frustrations by slamming the ball on the court.

“You’ve got to stay cool, keep your composure. Unfortunately, in the heat of the moment we didn’t. Going down the stretch, you don’t want to do it in this type of game,” Fabbri said. “You want to be able to stay cool and composed. Not let the other team start to see you get aggravated.”

But the resilient Bobcats came out a different team in the second half. Not one led by national steals leader and the teams leading scorer, Barron, but instead by the freshman off the bench, Martin.

Barron, who averages 16.7 points per game, ended the first half with just three points off of 1-for-5 shooting. Martin meanwhile had eight in the first half which came consecutively off of a layup and back-to-back 3-pointers.

Martin played in the second half looking as if she was not ready for her season to end. She had the fire in her eye and was playing her heart out diving for loose balls and playing tight defense. Following one loose ball, Martin had to leave the game as blood was dripping down her chin. But Martin came back just in time to help complete the 29-10 run and take Quinnipiac’s biggest lead of the game at 56-52 with 7:29 remaining.

“The key to the comeback was chip away, little by little,” Martin said. “We knew we had twenty minutes to fight. We went out there and gave it everything we had. If we had done that in the first half, we would have come out with the win. But we didn’t put two halves together.”

Monmouth regained composure late behind the experience of leading scorer Alysha Womback, who scored 15 of her game-high 21 points in in the second half.

“They have a great player in Womack,” Fabbri said. “Ball in her hands, she made plays and that’s what good players are supposed to do for the team and that’s exactly what she was able to do.”

Martin finished wish 20 points for the game, which tied her with sophomore Brittany McQuain for the team lead. Freshman Samantha Guastella also added a spark off the bench finishing with 13 points and eight rebounds.

Martin and Guastella accounter for half of the Bobcats points.

“There’s nothing but fight in her. She has just erupted and is fearless and her mentality, like Jaz’s mentality is not that of a freshman,” Fabbri said. “They are comfortable in these situations they expect to be in championship games, they expect to win games and they take the game with that mentality.“