Softball not settling for playoffs, aiming for title

Reigning Northeast Conference Rookie of the Year Jordan Paolucci has written “NEC Champs” all over her room: from the bathroom mirror to the ceiling above her bed.

The Quinnipiac softball team reached the NEC Finals last season before the championship game was canceled due to “unplayable field conditions.”

“Words cannot describe how much the returners want it this year,” Paolucci said. “I would run through a wall to get that championship.” 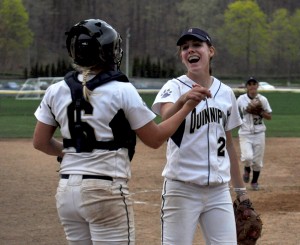 “We were so close and we had them, and I personally think they knew that we had them,” said Heather Schwartzburg, last year’s NEC Pitcher of the Year. “It’s just going to make us even stronger and make us want it even more this year.”

Quinnipiac head coach Germaine Fairchild said that the team is on a mission to not only get to the NEC Tournament, but to win it.

“I think that experience had burned on their hearts and minds until they are able to burn a different one, and they have definitely not forgotten it and they won’t,” Fairchild said. “I think we’ve got our team headed in the right direction and [the players] are definitely motivated by that experience.”

Schwartzburg, a senior, anchors the pitching rotation a year after breaking the NEC single-season strikeout record. Schwartzburg also posted an ERA of 1.42 last year, which led the conference.

“We have a great chance to win any ballgame that she’s pitching in,” Fairchild said. “She goes out there confident and gives the team confidence because of her own demeanor.”

Fairchild said what makes Schwartzburg so great is her ability to mix up pitches and put spin on the ball.

“She doesn’t put the ball down the middle of the plate and that’s number one for her, and that doesn’t even begin to talk about the kind of movement that she can put on the ball,” Fairchild said. “Her pitches move more than most batters have seen and she doesn’t have just one or two that move that way; she has four or five pitches, all of which move a significant amount as they approach the hitting zone.”

Along with Schwartzburg in the rotation, the Bobcats return sophomore Katie Alfiere and senior Mina Duffy. Christy Cabrera, who played 57 games last year, has also become a pitcher this season. Cabrera allowed two earned runs in 5 1/3 innings in the team’s game vs. Western Michigan on Sunday.

“She has all the pitches. She has great movement and she just needs some more time throwing to Division I batters,” Fairchild said. “She did not pitch for us last year, but she came out against Western Michigan and really gave the team a lot of confidence that she can hold a team in check.”

The Bobcats’ lineup from top to bottom is one of their strengths this season, according to Fairchild, with contact hitters like Cabrera, Lauren Salgado and Jacquie Ristow, to power hitters like Paolucci, Duffy, Alex Alba and Ashley Heiberger.

“It’s incredible. There is no hole in our lineup, which is really a luxury,” Fairchild said. “Sometimes you feel like you’ve got 1-5 taken care of and the bottom of the order is patchwork, but that’s not a problem for us … There’s no hole in the lineup, which is great. It’s a lot of fun to coach that from an offensive standpoint.”

Paolucci hit .351, slugged .702 and recorded a conference-leading 15 home runs as a freshman, but the team didn’t have a second power hitter behind her in the lineup last season. This year, Duffy has taken advantage as another big bat in the lineup, as she has hit three home runs and 12 RBIs through nine games.

“Having the two of them hitting back to back is the key,” Fairchild said. “Jordan had a great year last year and really we struggled to find somebody to be a legitimate threat behind her, which allowed other teams to walk Jordan a lot. What they’re running into this year is that if they choose to walk Jordan, you have to pitch to Mina and she’s producing in a big, big way.”

Ristow, a junior, said the team has been on the rise each year she has been at Quinnipiac, but said there is something different about this year’s team.

“This team has an opportunity not just to win the NEC, but to make it to (NCAA) Regionals and we really see this team doing something special this year,” she said.