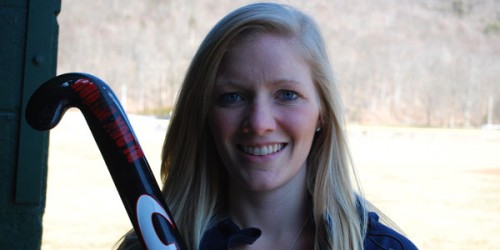 Walking together to the Arnold Bernhard Library, it is an ordinary week day for senior Ashley Gradwell and junior Caitlyn Hannum. Without skipping a beat, the couple breaks off their conversation and part ways – but not before sharing a goodbye kiss.

Ashley comes from Fogelsville, Penn., or “a high school in the middle of a cornfield,” as she puts it. At her high school there was one open lesbian couple, and Gradwell never would have wanted to be in their position.

“If I could go back, I would just shake their hands and say good for you,” she said with admiration in her voice.

When Gradwell was in high school, her parents divorced. Six months later, her father came out. Gradwell told her father of her own sexuality her senior year because she found him to be the most accessible outlet for discussion.

“My dad was a big buffer from the world for me. He told my mom. It’s hard to come out at any age because you never know what the response will be,” she said.

Coming from such a conservative Pennsylvania community, Gradwell wanted to make Quinnipiac her own. She needed a place where she didn’t have to keep things from people, where she knew she could be loved for who she is.

The first step in that process involved telling her freshman roommates. This happened through the “Roommate Contract” that the Department of Residential Life requires. In the portion of the contract that asks about significant others sleeping over, Gradwell told them her girlfriend would be. After a few “OK, cool” and similar remarks, they moved on to the next questions.

“Once we trusted each other and got past being just roommates, then the joking started,” Andrews said.

Gradwell said she knows people are comfortable with her sexuality when they are able to joke about it. That ranges from her roommates to her parents, and to the greatest community builder in her life at Quinnipiac: the field hockey team.

Coming out to the field hockey team was just as easy as it was with her roommates, possibly even easier for the 2011 co-captain.

“On the way to practice somebody asked if I had a girlfriend, so I said yes,” Gradwell said. “So the whole team knew in the five minutes it takes to walk to the field.”

Fellow 2011 co-captain Megan McCreedy said the other teammates had some questions, but everyone was always respectful.

“We’re a team,” said McCreedy, a native of South Africa. “It doesn’t matter what your sexual orientation is, what your race is, or anything at all, even what country you’re from.”

The team’s joking and curiosity made Gradwell feel like Quinnipiac was where she was supposed to be. Gradwell says it works both ways – she has questions regarding straight relationships too, since they are just as foreign to her. But in the end, “dating is dating,” Gradwell said.

Gradwell sees the lack of male friendships in her life, but is not affected by the reactions of her male peers.

“I would love to have guy friends however most guys don’t get past the “Oh, sorry, I’m gay,” long enough to be my friend,” she said.

Hannum, a junior math major from Stony Point, N.Y., has had a similar experience with Quinnipiac at large and specifically with Gradwell’s teammates.

“Ashley’s team has been fantastic, they talk about us and how much they love us constantly, I think,” Hannum jokes.

“Dating a woman is hard work, even though I’m a woman,” Gradwell said with a laugh, but her eyes stayed serious. “Everybody wants to know who the ‘man’ in the relationship is, but we really each have one leg in the proverbial pants.”

In continuing her egalitarian relationship philosophy, she wants a ring in a hypothetical engagement.

“I feel that’s my right as a woman, even if I’m the one proposing, to get a ring.”

While activism in the gay community is not a top priority for Gradwell, she stays abreast of current events and likes the shifting of the conversation in our country.

“I hope that one day, if my child is gay, they don’t ever have to deal with a double take for being so,” Gradwell said.

Those close to Gradwell continue to attempt to define what makes her so great to be around. Andrews claims how Gradwell “doesn’t care what other people think of her, yet goes about it without trying to make a statement.”

“Ashley really doesn’t have a problem with anybody, she is so refreshing to be around,” McCreedy said.

This is echoed by Gradwell, who says she does not have to be friends with everybody: “I don’t push my way of life on you. If you don’t like me, we don’t need to be best friends; I have plenty of people that love me.”

She does all of this without ever sounding hostile or bitter, and always being approachable. She exists in a world where her sexuality forces her to stand out. Ultimately it is how wonderfully, and almost paradoxically, she both plays up and plays down that aspect of her life, to be the individual that her friends and family all adore.