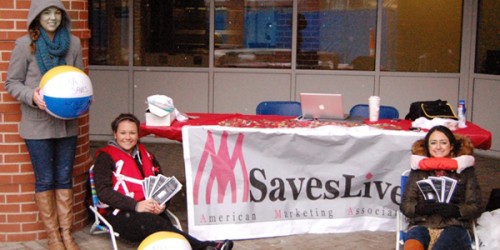 Students on Quinnipiac’s Mount Carmel campus were greeted this past week by lifeguards asking for just one thing: their organs.

Members of the Quinnipiac Chapter of the American Marketing Association braved the, albeit a little mild, winter weather in summer lifeguard apparel to raise awareness for organ donation. This was Quinnipiac’s first year participating in the national event, AMA Saves Lives. 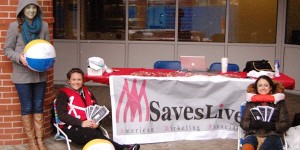 “I was very happy to see them because there are so many people that need transplants and people don’t realize the kind of life you have to lead if you don’t have [an organ],” Jones said. “It’s the little things we take for granted — drinking a glass of water, eating certain foods you can’t have because your body can’t get rid of it.”

Jones received her first kidney transplant when she was just 12 years old, which lasted her almost 18 years before it gave out under the stress of child birth, she said. Before her transplant, Jones was not given much time to live by her doctors and had to endure time on a waiting list, praying a matching organ would turn up.

Jones said waiting on the list for her first kidney, “was touch-and-go, they had given me three months to live, and by the grace of God it came in just in time.” After her donated kidney gave out, her brother came forward and offered her his kidney. She has now been living a healthy life for 28 years and is forever thankful to her two donors.

“That’s really the one gift of life you can give to another person,” Jones said.

The Quinnipiac community showed they were up to the task as AMA Saves Lives collected 89 new organ donor pledges during the week-long event.

Jones approached Quinnipiac AMA members during their event to show her support and tell them her story.

“[Jones] came out and said, ‘I’m an organ recipient,’ and [she] was saying how appreciative [she] was that we were doing this,” AMA Vice President of Membership Recruitment Danielle DiMarino said. “It made a difference, and I didn’t realize that people at our school were actually [recipients].”

Charbonneau said at that moment she “felt that our efforts were truly making a difference. We aren’t asking for money because you cannot put a monetary amount on saving someone’s life.”

AMA Saves Lives did more for organ donation than just adding 89 new names to a list. Quinnipiac’s AMA chapter also handed out informational brochures on organ donation to students walking outside of the student center. The brochures were designed to answer any questions and hesitation people may have about organ donation, and assisted AMA in its effort to promote awareness across campus.

DiMarino said the organization did a good job dispelling any myths about organ donation and answering questions interested students posed.

“Some people sign up for [organ donation] and don’t even know the significance of it,” DiMarino said. “And I think that we definitely brought that [point] across.”

During the week of AMA Saves Lives, members of Quinnipiac’s AMA chapter could be seen traipsing the quad dressed as lifeguards, throwing beach balls and even sporting life vests and inner tubes to grab the attention of passers-by.

“People thought we were crazy,” DiMarino said of the tactic they used called ‘guerrilla marketing.’ “The first day we were all in to it. We were in shorts and everything.”

Quinnipiac’s AMA chapter will travel to New Orleans later this month to report its numbers as part of AMA’s 34th Annual International Collegiate Conference on March 21. Quinnipiac AMA is also planning a volleyball tournament to benefit the Bella Tucker Fund on April 15.

For more information on AMA news and events, Quinnipiac’s Chapter has a newly revamped website at www.quinnipiacama.org.