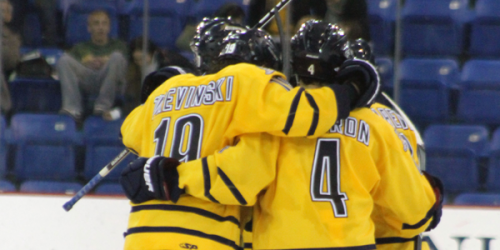 In a win or go home game 3, the Quinnipiac Bobcats (19-12-6) escaped with a hard fought 4-2 victory over the Brown University Bears (9-18-5) in the opening round of the ECAC Hockey playoffs.

Yuri Bouharevich’s empty-net goal from just inside the red line with 15 seconds remaining in the game eliminated Brown from the playoffs and clinched a spot in the semifinals for the Bobcats, as they will travel to Colgate next weekend in a best-of-three quarterfinals matchup in the ECAC Hockey playoffs. 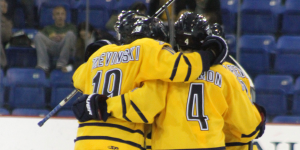 Quinnipiac head coach Rand Pecknold said that in order to beat Colgate next weekend, the Bobcats must have to be better all around.

“We are going to have to play better next weekend, this was not our best hockey,” Pecknold said. “ I thought last night, we played really well and I thought Friday night we were terrible. Tonight we were OK. We have our hands full. They have a really good team.”

With just less than a minute left in the game and down by one goal, Brown pulled goaltender Michael Clemente for an extra skater to try and tie the game at 3. The Quinnipiac defense forced a turnover in the neutral zone and Bouharevich gathered the puck and skated across the red line before depositing a line drive down the slot and into the open net.

Quinnipiac was in control after two periods, taking a 3-0 lead heading into the third, but Brown went on a furious rally to cut the deficit to one at 3-2 with 16:17 to play.

The Bears took advantage of a Kellen Jones holding penalty and struck 2:34 into the third, as Bobby Farnham blasted a slap shot from the point on a pass from Jeff Buvinow for a power-play goal. The one-timer found the back of the net as Quinnipiac goaltender Eric Hartzell could not get his glove on it after being blocked by a screen in front of the net.

Brown found the back of the net again about a minute later. Matt Harlow tipped and redirected Buvinow’s shot from the point just inside the slot area. With Harlow in front of the crease, Hartzell was screened cutting the deficit to one with 16:17 to play.

“We talked about not taking penalties and we took two really unnecessary penalties there in the third,” Pecknold said. “They got the one their early and we just kind of lost a shot block battle in the second goal. Those things happen. I like the way we battled back and persevered and found a way to win the game.”

The first two periods belonged to the Bobcats in terms of the scoring sheet with two goals in the first and one in the second. Although they were outshot 37-33, Quinnipiac capitalized when it mattered.

Just like game 2, the Bobcats came out of the gates on fire. Quinnipiac struck right from the opening faceoff. Just 1:16 into the game, Kellen Jones scored on the power play. Brown’s Jarred Smith was whistled for interference a minute in and the Bobcats capitalized 16 seconds later. Freshman Matthew Peca sent a pass just inside the blue line to Jones. Jones one-timed a blast from the top of the slot, inside the point, beating Clemente for his 13th goal of the season. Peca earned his 27th assist of the year.

Quinnipiac’s offensive attack was not just their first line of Peca and the Jones twins. The Bobcats received balanced scoring from seldom-used fourth liner Kevin Bui, as he scored his third goal of the season.

Bui gave Quinnipiac a 2-0 lead eight minutes later, as he gathered the free puck in the slot after it was kicked away from Bryce Van Brabant’s skates. Bui was in clear sight of the goal on a breakaway attempt, with only Clemente to beat. He drove the net hard before wristing a shot top shelf past Clemente.

“We needed that,” Pecknold said. “I think we had 11 goals in a row that Peca was involved in, that whole group. You can’t play without secondary scoring. Kevin Bui had a huge one, his third goal of the year. All three have been huge for us and then Clay Harvey with a monster goal his second of the season. He has been playing really well. He buried that thing. It was nice to seem him finish.”

The Bobcats did not stop their offensive attack, as they built a 3-0 lead 3:25 into the second period on a 2-on-0 breakaway opportunity.

Brown’s rush down the ice was broken up by Quinnipiac’s defense. As soon as Brown went to make a line change, Zack Currie quickly fed the puck to Spencer Heichman along the near boards in the neutral zone. Heichman charged up the right wing with Harvey skating down the slot area with no defenders in sight. With Brown out of position, Heichman sent a pass across the slot to Harvey, who lifted a wrister past Clemente.

“Currie made a nice play to chip it up to me. I heard my bench telling me it was in and I was thinking it was going to be a 2-on-1, and I look over and Harvey’s right next to me. Pretty fortunate we got that break and go up 3-0,” Heichman said.

Said Harvey: “I couldn’t believe there were no defenders in the way, but it was a nice break for us.”

Hartzell stopped 35 shots for Quinnipiac, while Clemente made 29 saves for Brown.