Quinnipiac falls in another playoff heartbreak 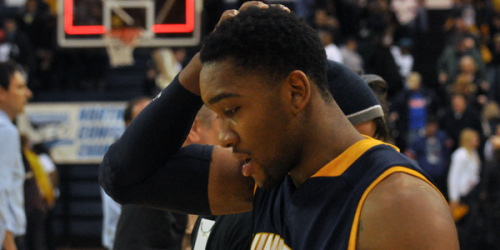 Quinnipiac head coach Tom Moore and senior guard James Johnson walked off the court Sunday night at Wellness Recreation Arena Center in Brooklyn, N.Y. with an all too familiar feeling that they wished they never had.

The feeling of disappointment, heartbreak, and defeat. 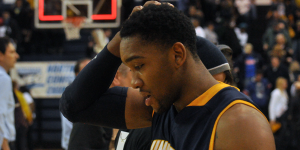 The Bobcats led the Blackbirds 65-57 with 7:35 to play, but saw the lead dwindle away with their season.

“I was confident we were going to win,” Moore said. “These guys have given me their confidence over the last eight weeks or so.”

But the defending NEC champs were not going to go down without a fight. The Blackbirds extended their home winning streak to 26 consecutive games, outscoring the Bobcats 21-10 over the final 7:35 of the game.

“They played like you expect a defending champion to play on their home court in the last eight minutes,” Moore said. “We didn’t make enough plays to match how good they were, we were probably two plays short on both the defensive and offensive end.”

In what was an extremely physical battle, both teams dealt with key players in foul trouble down the stretch, but by the end of the game it was the Blackbirds were going to the line, while Quinnipiac was kept away from the charity stripe.

Dave Johnson and Ike Azotam both fouled out of the game. Azotam finished with 17 points and eight rebounds.

“It definitely affected the way I coached the game,” Moore said. “I felt handcuffed with some of the personnel moves I could make.”

In the final six minutes, LIU hit nine free throws opposed to the Bobcats, who only went to the line four times in that span, hitting just one.

In total the Blackbirds went to the line 30 times, hitting 22 of their free throws, while the Bobcats went 5-for-10 in the game.

The turning point came with the Bobcats up 69-66 and 4:16 left in the game, Julian Boyd, who had a game-high 21 points, hit a layup and was fouled.

Boyd converted the three-point play to tie the game at 69. Just 45 seconds later, Boyd hit another layup to give the Blackbirds a lead they would not relinquish.

The Bobcats had plenty of opportunities to pull back within the game during the final minutes.

With 1:07 remaining and trailing by five, Jamee Jackson made a layup and was fouled, but could not convert the three-point play.

With 28 seconds remaining, Johnson had a chance to pull the Bobcats within one on a fastbreak, but could not make the layup.

LIU would hit its free throws in the waning seconds to secure its spot in the NEC Championship game against Robert Morris on Wednesday.

Johnson finished the final game of his career going 7-for-17 from the field, with a team-high 17 points. As the buzzer sounded, he took one last three-pointer and made it.

“It’s always tough knowing it’s your last game, knowing there’s a couple of plays I could have done better that could have swayed the outcome of the game,” Johnson said. “Being the tough competitor that I am I put the loss on my shoulders.”