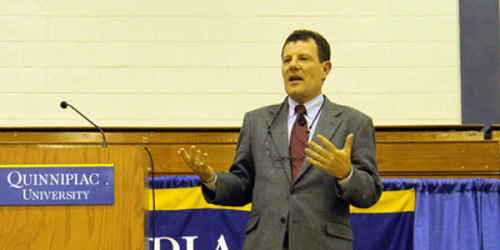 Nicholas Kristof teaches students how to make a difference in the world at Burt Kahn Court Thursday.

Pulitzer Prize winning New York Times columnist Nicholas Kristof came to Quinnipiac Thursday evening, urging students to seize the day in his lecture, “A Call to Action: Encouraging Young People to Join the ‘World’s Fight’ & Take on a Cause Larger than Themselves.”

Kristof challenged every member of the audience in Burt Kahn Court to embrace an issue depending on what cause speaks to him or her most, and to work to change the world in the context of that issue.

Kristof ended the speech by noting: “We have won the lottery of life. The question then becomes how you go about discharging the obligations that come with it. I hope you’ll find a cause that really speaks to you whatever it may be, that helps you find happiness and fulfillment, and that you change the world.”

The School of Communications and the Cross Talk Committee, sponsors of the event, invited Kristof to speak at the university after the release of his most recent book, “Half The Sky,” a QU 301 required reading. The book, co-authored by his wife, Sheryl WuDunn is about the global oppression of women.

Kristof explained that we are often not affected by books we read and what is learned in the classroom as much as the experiences we encounter. Kristof prefaced his call to action with a call to travel, encouraging students to take advantage of any opportunity to travel abroad and explore the world and not to wait until a later point in life to contribute to society.

“Travel out of your comfort zone to experience a different world than which you’re used to,” he said, speaking from his vast experience as he has lived on four continents, reported on six, traveled to more than 140 countries, and all 50 states.

He also told students that they could escape their comfort zones simply by venturing into the rough neighborhoods of New Haven.

“There are huge needs half a world a way but there are also huge needs right here at home,” Kristof said.

Accepting the challenge Kristof presents to his audiences is no small feat: “Helping people is harder than it looks,” he said.

He also stressed to the audience the importance of education and how it is the greatest challenge we face in the world today.

“Education is a common thread that helps improve a lot of the problems we face,” Kristof said. “It does not solve everything, but it’s the closest thing we could focus on that would make a big difference.”

While it can be distressful to be in the middle of so much conflict, he said that he has also observed change and progress in his travels.

“You see the failures and you see the difficulties but you also see real successes. And when those successes work, it’s utterly transformative,” he said.

Reporters and service workers encounter many obstacles in their efforts to better humanity, he said, recounting instances when finding the solution to a problem only led to more problems.

“I’ve become a believer in incremental, very specific projects that don’t solve the global problem, but for the people it helps it makes a dramatic difference,” he said. “The way you make a difference isn’t by solving the whole problem, it’s by chipping away at it.”

Kristof highlighted that working for a cause is a genuine mood lifter.

“One of the things that makes a difference in [our] base level of happiness is some kind of connection to a cause larger than ourselves,” He said.

Sophomore Angelique Fiske said that it can be easy to forget what a powerful difference journalists can make in the world. As a journalism major, she said it was especially inspiring to see a person who makes the most of his role as an influential columnist by spreading awareness about serious issues and urging young people to create positive change in society.

“I thought Nicholas Kristof’s lecture was one of the best things I’ve attended at Quinnipiac,” said sophomore Angelique Fiske. “He made me realize that regardless of what I do or how young I am that I can make a difference, even if it’s just for one person.”

Kristof most recently returned from the Nuba Mountains in the South Sudan, an area currently going through a severe humanitarian crisis involving bombings, ground attacks and sexual violence. Part of a vicious ethnic cleansing mission by the Sudanese government, Kristof has expressed deep concern in his columns that this situation could be “an echo of what Sudan did in Darfur.”

He mentioned that a student had asked him if he ever became depressed by being witness to extreme hunger, poverty and human strife in developing nations.

“What is depressing is to come back to this country and to see there’s no greater expression of humanity than to have a hot car or cool cellphone,” Kristof said.