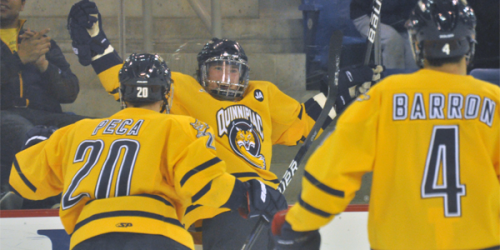 After a 4-1 loss last night in which the Bobcats outplayed by the 12-seeded Brown Bears in game 1 of the opening round of the ECAC Hockey tournament, Quinnipiac came out for game 2 firing from the start and earned a 3-0 victory Saturday at High Point Solutions Arena at TD Bank Sports Center.

Freshman forward Matthew Peca has been on fire since dating back to the 4-1 win against this same Bears squad on Feb. 24, the center has had his hand in the last 10 goals scored by the Bobcats. Peca’s 26 assists this year are the third most for a Quinnipiac freshman in program history, while his 34 points are good for fourth all-time. 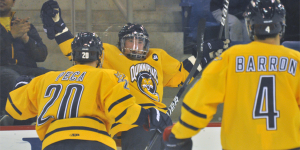 [/media-credit]“I think just our whole line is clicking,” Peca said. “Even with (Loren) Barron and (Zack) Currie on the ice with us, all five of us read off each other well. A good example is Connor’s goal today. He pretty much made that play happen by himself, I just had too one touch it back to him. I think we’re all clicking really well.”

Quinnipiac head coach Rand Pecknold said he was pleased with Peca’s performance and believes Peca, who was a seventh-round draft pick by the Tampa Bay Lightning, has played well all season long.

“It’s a pretty special line,” Pecknold said. “He’s on a roll right now and it’s pretty impressive for an 18-year old who’s been this consistent. He’s been good all year. Tomorrow’s a great test for him, an 18-year old kid, having to play his third in three nights.”

Peca and Kellen Jones each helped in all three goals to help the Bobcats (18-12-5) force a third and decisive game on Sunday night at 7 p.m.

Quinnipiac came out of the gates with a bang, as the Bobcats took 19 shots in the opening stanza compared to Brown’s seven.

“I thought all 12 forwards were going, especially that first period [when] we outshot them 19-7 and we wanted to establish ourselves,” Pecknold said. “Everybody competed.”

The Bobcats utilized their top scoring line of Peca paired with twins Connor and Kellen Jones to great effect on the power play. Quinnipiac jumped out to a 1-0 lead just 2:11 into the game. Kellen fed the puck from the halfboards to Peca, who found Connor charging the net down the left wing. Peca fed Connor with a chip pass and he toe-dragged before deking past Brown goaltender Michael Clemente and deposited a back-hander into the open net for his 10th goal of the season.

“We got on them early,” Peca said. “Brown’s the type of team that if you get on them early and hound them down early, they have a tough time coming back.”

Kellen’s 21 assists this season gives the line a trio of 20-assist players for the first time since the 2009-10 season when Eric Lampe, Jean-Marc Beaudoin and Brandon Wong each recorded the feat.

Brown’s offense was stymied by the Bobcats defense all night, as they managed only 16 shots on goal.

“It was excellent,” Pecknold said. “I thought a lot of our defense was our offense. I thought we spent a lot of time in the Brown offensive zone and we got after it. The d did a nice job of cleaning things up. Our backcheck was excellent and we didn’t have a lot of penalties but we did a good job.”

Quinnipiac’s relentless offensive attack led to another goal with 10:05 to play in the first period. Spencer Heichman kept the puck in the offensive zone for the Bobcats near the boards. Barron found the puck on his stick at the blue line. Barron deked a Brown player at the point before firing a wrister towards Clemente. With a screen set in front, the wrist shot seemed to go wide of the net, but the puck deflected off Brown defender Joey de Concilys and into the net past Clemente.

Seven minutes into the final period, Kellen Jones picked up the puck behind the Bobcats goal before giving it to Currie deep in the Bobcats’ zone. Currie skated across the Bobcats’ blue line into the neutral zone before firing a pass to Peca in front of the penalty box. Peca drove hard at the net on Clemente before flicking the puck over his right shoulder for his eighth goal of the season.

Quinnipiac’s defense and goaltender Eric Hartzell were up to the task of shutting down Brown’s offense after it scored four goals last night. Hartzell turned away all 16 shots he faced for his fifth-career shutout. It was Hartzell’s second shut out against the Bears in the postseason, as he managed a 4-0 shutout in last year’s opening round of the playoffs as well.

“I think the whole season, one of our strengths has been defense and clearing rebounds and really helping me out and making my job easier,” Hartzell said. “If we continue to do that we are going to go a long way.”

Quinnipiac outshot Brown 42-16 and the Bobcats converted two of their four power-play opportunities while denying both of Brown’s power-play chances.

Clemente stopped 39 shots for the Bears.