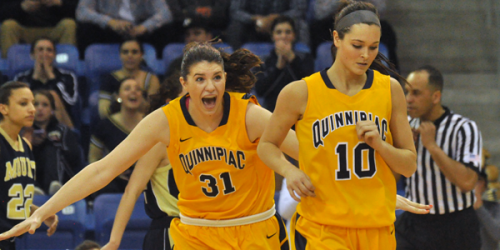 Coming into the Northeast Conference tournament as a No. 2 seed, the Quinnipiac women’s basketball team, who has made the postseason for 13 straight years, found itself in an unfamiliar position. Instead of being the hunters, they were the hunted.

But, the team played up to the challenge and defeated No. 7 seed Mount St. Mary’s on Saturday 65-61 at TD Bank Sports Center. 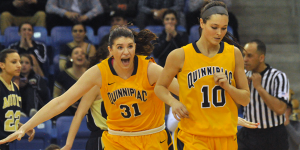 Junior guard Felicia Barron led the Bobcats with 15 points. With 16:43 left in the second half, Barron hit a free throw to give her 1,000 points in her career.

“It’s pretty big, I’ve only been playing for two years so it’s kind of shocking that I already have a 1,000,” Barron said. “But, I’m going to just keep playing basketball and hope we win this whole thing.”

The NEC Defensive Player of the year also has 511 points on the season, which is third all-time in Quinnipiac’s Division I history.

Going into the second half with just a two-point lead, the Bobcats put together a 10-3 run to start the half and extend their lead to eight, 39-30.

Quinnipiac would later have its biggest lead of the game 50-40 with 12:12 remaining following a Jasmine Martin layup.

But the Mountaineers weren’t ready for their season to be over. The team’s leading scorer, Sydney Henderson, and sophomore Kayla Grossett put together a 10-0 run by themselves over the next 2:56 to tie the game at 56 with 9:16 to play.

However, the Bobcats stayed confident and didn’t allow the Mount to take the lead at any point during the second half.

“Even if we’re down by 10, we can’t keep our heads down, that’ll get us out of the game and we’ll end up losing,” Barron said. “We just kept our heads high and just wanted to play as best we could no matter what the lead was.”

With a minute remaining and Quinnipiac leading by one, 61-60, Martin found herself under the hoop looking for someone to pass to. That’s when freshman Samantha Guastella cut through the lane, received the pass from Martin and laid it in to extend the lead to three. Barron and Brittany McQuain would add a free throw each to seal the victory.

Guastella finished with 11 points and five rebounds off of the bench. Martin added 12 points on 5-of-9 shooting.

McQuain only shot 3 of 12 from the floor, but she was consistent on the boards, grabbing 17 rebounds and adding nine points.

“My coaches, all of them, always tell me rebounding is an attitude, it’s not talent per say,” McQuain said. “When a shot goes up, you just have to go after it. You have to forget about missed shots. You have to get that rebound because the only way you’re going to stay in the game is getting second shots and getting your team the ball back.”

The Bobcats recorded 17 offensive rebounds and turned those into 19 second-chance points.