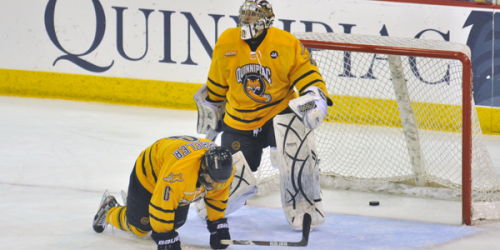 Despite entering the first round of the ECAC Hockey playoffs seeded No. 5, the Quinnipiac men’s ice hockey team could not overcome 12th-seeded Brown in the first game of a best-of-three series Friday at the High Points Solution Arena at TD Bank Sports Center.

“You can make up for a bad season in one weekend, and that’s what [Brown is] doing,” Quinnipiac head coach Rand Pecknold said. “They were fired up, they were ready to play, they battled and they played well, and our guys were just lost the whole game. We just were not ready to play. I’m literally shocked at how poorly we played tonight.” 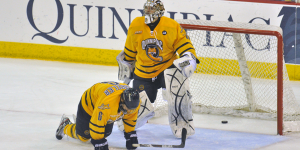 [/media-credit]The Brown Bears secured their victory in the second period when forward Ryan Jacobson scored the winning goal. Jacobson traveled down the ice alongside Jack Maclellan, who moved the puck into Quinnipiac’s zone. With Bobcat goalie Eric Hartzell focused on Maclellan, the forward crossed the puck to Jacobson who sent it into the net.

“I think a lot of things happened from last weekend’s game,” Pecknold said. “They had Maclellan back, who is one of the better players in the league. He was really good tonight. He made the play on that 2-on-1, he was really good on faceoffs. He just changed the whole face of the game.”

Brown’s Chris Zaires knotched the insurance goal with less than three minutes in the game. With both teams clustered in front of the net, Hartzell couldn’t keep an eye on the puck, allowing Zaires to flip the puck over the goaltender’s head and into the net.

“You always want to be at your best, especially come playoff time” freshman forward Matthew Peca said. “I thought we were great last weekend, and for some reason, guys just seemed a little flat or maybe a little tired. I don’t want to say we weren’t competing but maybe we were a little tired.”

The Bobcats’ goal came at 12:53 of the first period. When the referees sent Zaires to the penalty box for slashing, the Bobcats took control of the man advantage. Thirty-one seconds later, Matthew Peca passed to Connor Jones at the right faceoff circle. With a look toward the goal, Jones sent the puck to Zack Currie in front of the net, who shot past Bears goalie Mike Clemente putting the Bobcats in the lead.

This was Currie’s ninth goal, which is the most for a defenseman since Reid Cashman’s 13 in the 2004-2005 season. Currie is tied with Dan Ennis (2002) in third for the most goals scored by a defenseman in program history.

“I give Brown a lot of credit. They came in and they outbattled us, they outcompeted us, and they won the game,” Pecknold said. “They played well. I thought we had some guys that played well. We definitely had some players that were good. We had a chunk of guys who were just awful. They were just disinterested, didn’t compete, lost battles, lost races.”

The Bobcats take on Brown in Game 2 tomorrow at 7 p.m.

“We’re going to do what we’re supposed to do, which we didn’t do tonight,” Pecknold said. “We need to compete, we need to battle, we need to win races and we need to win battles…We need to go back to our system, play hard, compete, battle, which is great; it’s how I want it done. It’s a two out of three series. We’re at home. We need to find a way to win tomorrow night and get to Sunday.”